Opening Thrashterpiece – What is the best thrash opening track ever? 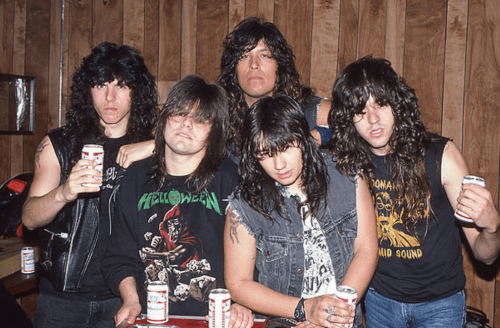 Well, this was a fun one. There are many blood flinging thrash albums that have kicked our asses here and back again over the years, but which one has the best opening track of all time?

Let the battle begin BELOW!

“Angel of Death” – it opens with that infamous scream, and the whole track sets the tone for a completely relentless album. – Sally Gates ( Titan To Tachyons, Orbweaver )

“March of the S.O.D.” was the first time I ever remember a riff making me want to jump out a window and murder a bunch of people for no reason… – Jason Christopher ( Prong , Corey Taylor )

Not only do I think “Blackened” is the best album opener of all-time – it’s my favorite Metallica song. It combines all of the great things that Metallica does, but turned up to 10. Epic intro? Check! Thrash-tastic, headbangin’ main riff and verse sections? Check! Anthemic bridge destined to light up mosh pits and inspire the masses to sing along? Check! One of the best Kirk Hammett guitars? Checkmate! I’m not sure if Metallica has achieved such power, aggression, and transcendent pure metal mastery since “Blackened” was released over 30 years ago. – Doc Coyle ( Bad Wolves, God Forbid )

One of my favorite opening tracks on an album is “Black Sin (Spit on the Cross)” by the legendary Seattle rippers Black Breath. For many years, they would host holiday season shows, right around my birthday. Stage diving during the bridge of that song to the infamous call “REJECT CHRIST, SPIT ON THE CROSS” became a little gift I would give myself to charge up for the coming year.  – Brian McClelland ( Filth Is Eternal , He Whose Ox Is Gored , The Great Goddamn )

Anthrax – “Among The Living” from Among The Living. I heard Among The Living just a year or two after it came out, when I was in elementary school, riding my Valterra skateboard, and the high school badasses would show up in a Scirocco with rear speakers that filled the back and start hitting the launch ramp on their pro decks, blasting metal. Leading with the title track sets up the entire album; the opening riff alone has the illest tone, then they dial you in with that slamming, building chug, but at a minute-and-a-half in the song explodes and then doesn’t let up for the next four minutes, besides the monstrous two-step mid-paced mosh section at each chorus. Still  my favorite album ever. – David Brenner ( Gridfailure )

“Hell Awaits” – Slayer. The intro fade up with backwards chanting ‘join us’ and ‘welcome back’ set a new precedent for dark music. The thundering toms over dissonant riffing, the panning of the guitars as double kick drums chug along and drag you on a satanic train ride into dark thrash hell. Uncharted territory at the time, the intro sums up and sets the precedent for the sound that we all know and love as Slayer. – Scott Harris ( Hororhaus )

I think I’m going to go with “Time,” from Anthrax’s “Persistence of Time.” It was the first metal album I ever owned, a cassette given to me by an older neighbour I used to do Tae Kwan Do with way back whem I was around 7-8 years old. The ticking clock speeding up leading into that pounding intro… Just the intensity of it blew my mind. Metalhead for life after that. – Justin Pierrot ( Stormland )

Choosing a favorite opening Thrash track is a nigh-impossible task. “Battery” is unmatched for its marriage of epic scope and teeth-baring aggression, “Hell Awaits” is a labyrinthine statement of pure evil, and “Nuclear Winter” is a rip-snorting bruiser of massive proportions, but… Ultimately “Bonded by Blood” with it’s weird “airplane about to take off” sound-affect intro does it for me. Nothing encapsulates unadulterated, wanton aggression more than that track and that album. As a statement of intent, it’s unmatched and it kicks off the greatest Thrash debut of all time. In the end Baloff was right – “intense metal is all that you need!” – Matt Harvey (Exhumed, Pounder, Gruesome, Scarecrow)

(Editor’s Note: Who knows? Perhaps someday someone will choose Matt’s own thrash project Scarecrow’s “Raise The Death’s Head” for a future list like this?!)

Exodus “Bonded by Blood” always gets my blood pumping. Plus they’re Bay Area, so that has cool points for me. It’s so street and so perfectly 80s Bay thrash. I love that record. – Andrea Genevieve ( Psychic Hit )

“Battery” by Metallica. Right from the opening acoustic bit you’re like, “What in the good, the bad, and the ugly is happening here???” The distorted guitars kick in and that Morricone-esque balladry turns into one of Metallica’s most epic riffs up until that point in their careers. It all breaks down and the main riff is introduced. The rest is a fast, sometimes groovy, thrashy, yet musical number that happens to be a dedication to the very fans that love this kinda shit. Ripping solo, great lyrics, Lars… well doing his best. Despite anything they did following this album or the next, you can’t take this away from them. This was the pinnacle of Thrash metal at the time when Thrash was in its heyday. Anyone who says it wasn’t is being deliberately contrarian and should be regarded with great suspicion. lol – Jwyanza Hobson ( Crisis )

“Battery” by Metallica. I choose that one because I was a child when I heard it and I wanted to play music right after hearing it. It actually changed my life. Not a fan of them anymore though. – Doc Luna ( Luna 13 )

I almost also went with “Battery” because it is so epic, but to me “Practice What You Preach” by mighty Testament just has everything going for it that I look for in a thrash song. It is both thrashy and bouncy (thanks to Greg Christian’s insanely grooving bassline often imitated and never quite replicated), has a cool message, killer Skolnick leads and Chuck Billy’s fucking dominating sky shattering bellow over peak melodic mid tempo thrash glory. Title track of my favorite Testament album as well, so hard not to go with this one. – Morgan Y. Evans (Walking Bombs, DIVEST, Metal Riot)

This is such a hard question to answer and something we’ve actually had a few long van conversations about as well as our appearance on the Thrashers, Slashers and The Road To Wrestlemania podcast episodes of “Best Thrash Metal Album Ever” tournament. There’s so many that are go-to options and ones people are justified in having a knee jerk reaction to picking like “Angel Of Death” or “Holy Wars” or “Battery” but after giving this probably a bit too much thought and going on what currently hits me the hardest, amplifies my Cherry Limeade Reign caffeine rush the highest, and increases dumbbell chest press the most and makes me want to uppercut anyone within a 30 foot radius without hesitation, its “South Of Heaven”. I feel like this album overall is kind of the sleeper of the initial batch of Slayer records because its following arguably the best thrash album ever and precedes the album that, whether people want to admit it or not, was a lot of peoples first exposure to the band. The song in particular is so heavy and and evil and blunt force face smashing with the speed variations and the less than 100mph approach. – Rick Jimenez ( Extinction A.D. )

I’m gonna go with SODOM’s “An Eye For An Eye“,  from Better Off Dead. I do like how some of the early American thrash bands were influenced by the English and European Dbeat bands but once I discovered the Teutonic power of the German Thrash bands they took over my stereo. With Eye For An Eye I loved the Riff and the way the drumming transitions from single bass to double bass throughout the song, even under the Lead section I was still banging my Head. Great catchy powerful Riffs… – Lorin Savadove ( The End A.D.)

Greatest opening track on a thrash album? This is a tough one, as there’s been so many thrash albums with such killer opening tracks over the years. “Ton Of Bricks” from Metal Church was a longtime favorite, as was Anthrax’s “A.I.R.” to just name a couple of my personal honorable mentions, but I think if I had to narrow it down to only one song, it’s gotta go to Megadeth’s “Last Rites / Loved To Deth”. It starts off with this piano intro that makes a first time listener just be like “uh, what the fuck is this, it’s not Metal”, but It suckers you in, and then it quickly turns into this chaotic high speed track that makes your head start to rattle as you violently shake it. Shit, just thinking about the riff now is making my neck hurt, just like it did the first time I hit the play button on this album. – Andrew Johann Datoush (Metal Riot)