Orbweaver check in from the road 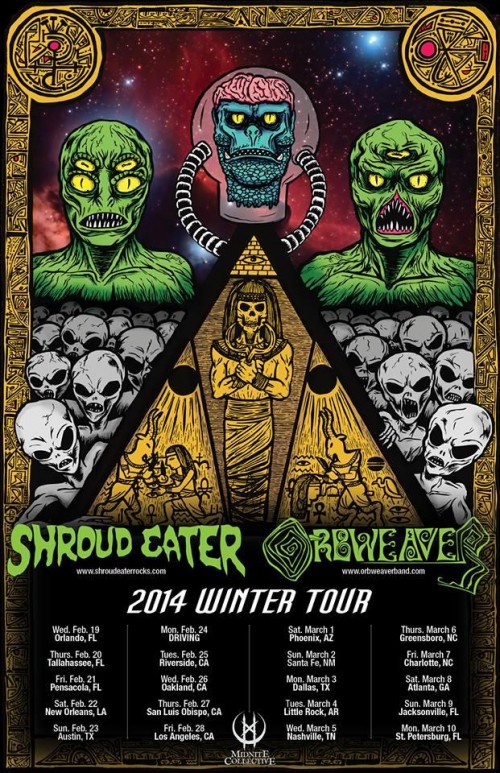 Relays guitar demoness, Sally Gates, from the van, “The ‘Wintour’ has been excellent so far. We’ve had a great response at all the shows and some very generous hospitality. A couple of highlights from the road including stopping in New Orleans in the lead up to Mardi Gras. We had a massive sci-fi-themed parade go right past the venue. There were even Dr. Who costumes and floats! We also had an archery challenge in Pensacola — New Zealand vs Colombia vs USA. Scores are still being debated…It’s great to be on the road with our good friends Shroud Eater, and the bonus of touring in the Winter is that the van still smells fresh! Thanks to everyone who’s come out to our shows so far, and hope to see the rest of you on the road!”

ORBWEAVER is currently touring in support of their cranium-crumbling Strange Transmissions From The Neuralnomicon EP, released last Summer. Recorded at Miami’s Pinecrust Studios with Jonathan Nunez of Torche and mixed/mastered with Brian Elliot at Mana Recording Studios (Hate Eternal, Cannibal Corpse, Goatwhore, Exhumed), on Strange Transmissions From The Neuralnomicon, ORBWEAVER travels far beyond conventional genre realms with a kaleidoscopic fusion of psychedelia, noise, and a distorted rendering of progressive death metal. Perpetually shape-shifting between these impulsive, trance-like elements, ORBWEAVER manifests interplanetary pandemonium reminiscent of a Zappa-esque brand of controlled and violently elegiac chaos.