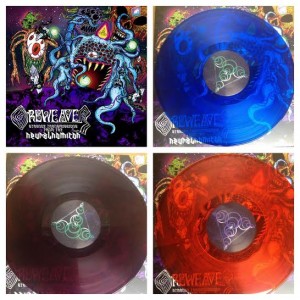 Detroit-based Corpse Flower Records is pleased to release the vinyl edition of Transmissions From The Neuralnomicon, from Florida exploratory death metal behemoths, ORBWEAVER!

The brain-fraying Transmissions From The Neuralnomicon EP was recorded at Miami’s Pinecrust Studios with Jonathan Nunez of Torche and initially released last Summer in a limited run of 100 cassette tapes via Primitive Violence Records and on CD direct through the band. The vinyl edition has been remastered by James Plotkin (OLD, Scorn, Khanate, Khlyst) and is limited to 300, hand-numbed and assembled copies in three color configurations: 100 on translucent blue, 100 on translucent orange and 100 on translucent purple. Each copy comes with an an 11″ x 17″ poster and digital download.

Commended for their, “twitchy, trippy tech death,” by Invisible Oranges and called, “big, oozing and unusual,” by Sea Of Tranquility, on Strange Transmissions From The Neuralnomicon, ORBWEAVER journeys far beyond conventional genre realms with a kaleidoscopic fusion of psychedelia, noise, and a distorted rendering of progressive death metal. Continually shape-shifting between these impetuous, trance-like elements, ORBWEAVER conjures interplanetary pandemonium reminiscent of a Zappa-esque brand of controlled and violently elegiac chaos.

Order Strange Transmissions From The Neuralnomicon on wax via Corpse Flower Records at THIS LOCATION.