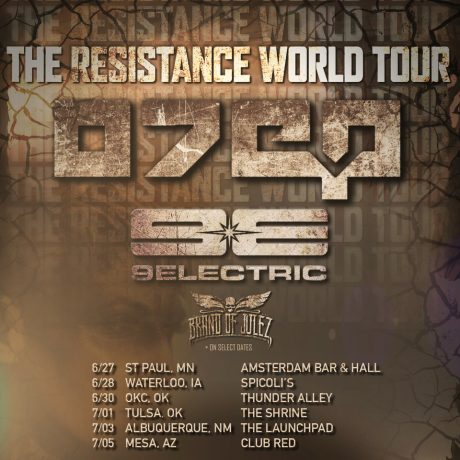 L.A. electronic/nu hard glam rockers 9Electric will share the stage with OTEP for the final stage of The Resistance World Tour. The Convalescence of course recently had problems with Otep and are no longer part of the tour but on a personal level Otep has always been super awesome, articulate and chill with us over here at Metal Riot. While we have of course never toured with her we know lots of bands who have and it is def the minority who have ever bitched about her. For the record, it is hard to imagine a person who helped me come out as bi and who has given some of the more succinct and real interviews I’ve ever gotten to be a part of as so unreasonable to work with.

Anyway, keeping it posi…the remaining dates with 9Electric are sure to be fun for those attending. Check out “The Damaged Ones” below. Kind of reminds me of a cross between Opiate For The Masses, Sixx:A.M. and Adema.

Speaking about joining Otep on their remaining US tour dates, 9Electric frontman Ron “Thunderwood” comments, “9Electric is so stoked to join Otep on their Resistance Tour!  Here’s a scene comprised not simply of music fans, but fans of something deeper – fans of art, and fans of an unflinching quest for self-realization. Otep inspires people the way all great artists should, and 9E can’t wait to contribute to this scene.”