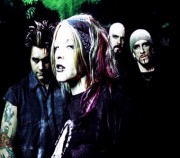 Victory Records had this to say on the release:

“OTEP’s final album Hydra is out today, January 22nd and is already climbing the iTunes charts; currently at #8 on the Rock Chart and #78 on the Overall Chart. Hydra takes listeners on a fantastical, demonic ride through the mind of a girl who has been cast aside, set on vengeance against the world that has forgotten her. Seducing your ears with every aspect of the vocal spectrum, the artist, activist and poet will put you in a trance, creating a theater of the mind the likes of which you have never imagined before.”