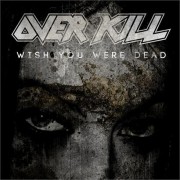 New York thrash legends Overkill have just released the second single from their upcoming album The Electric Age.  The song is called “Wish You Were Dead” and can be found in lyric video form right here.

Overkill will be touring in support of the release in April and May with God Forbid, Diamond Plate, and Sudikara.  More information can be found here.