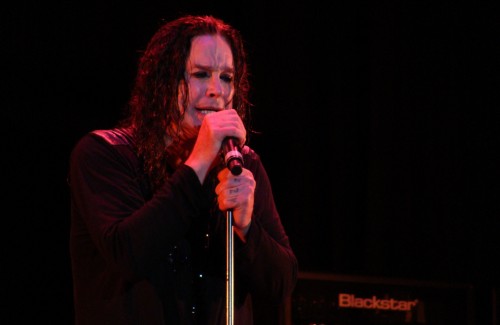 Not only was Ozzy dealing with substance abuse, he was having a hard time keeping a cohesive line-up for his solo project. In 1985 when he recorded The Ultimate Sin, he recruited Phil Soussan on bass. Ozzy had been working with Bob Daisley during the Randy Rhoads era, and the first part of the Jake E. Lee era. In fact, Daisley had written most of the material for the album with Jake E. Lee and Ozzy Osbourne, as he had co-written Ozzy’s first three. Daisley went on to play on three Uriah Heep albums, and even on Black Sabbath’s 1987 The Eternal Idol. Daisley would ultimately return for 1988’s No Rest for the Wicked before permanently departing after 1991’s No More Tears.

The Ultimate Sin was Jake E. Lee’s second and last album with Ozzy, after starting with him in 1983 to record Bark at the Moon.

The album was an introduction of Randy Castillo on drums, and he would stick around for two more albums (1988’s No Rest For The Wicked and 1991’s No More Tears). Castillo also performed live duty on 1990’s live EP Just Say Ozzy and 1993’s Live & Loud.

Read my full retrospective on the album here.

The album starts with the title track, which starts with pounding drums that lead into a chugging guitar lick. It’s a pretty solid track and a good way to start the album. I’m not going to speculate about who the lyrics are to, but they have a rather definitive message, “Anyway I look at it now // The doors are closed and cannot be opened // Bury your anger and bury your dead // Or you’ll be left with nothing and no one”.

The song goes into the final chorus with this lyric, “I warned you then and I’m warning you now // If you mess with me you’re playing with fire // Winds of change that are fanning the flames // Will carry you to your funeral pyre”.

The second song is more introspective. “Secret Loser” starts out with the lyrics, “Trapped in a lonely body // I’m losing control // Can’t show my emotions // And I’m losing my soul.”

The song starts to stand out musically around the two minute mark when Jake E. Lee has his first solo of the record. The track wraps up with the lyrics, “I can understand that what you see // You think is real // But underneath the surface // Is a wound that cannot heal.”

“Never Know Why” probably has the most musically diverse start out of any song on the album. The guitar wonkery that Lee engages in creates a great atmosphere. It may be the most metal musical introduction to the most metal lyrics on the album, “If we’re offensive and pose a threat // You fear what we represent is a mess // You’ve missed the message that says it all.”

I think (but don’t know) that this song is about Tipper Gore and the PMRC.

The downside to this song is that it is pretty repetitive.

The song ends, “Nuke ya, nuke ya.” A pro-nuke song seems pretty heavy. And I can’t help but think of the implications for a Japanese audience, who are often supportive of heavy metal. I’m sure they don’t appreciate the idea of a song praising the power of nukes to stop wars. I’m sure they don’t, “Thank God for the bomb.”

After that train wreck of a track throws off the mood of the album, it gets back on track with “Never”. At least, as back-on-track as this glam-heavy-metal album with deeply introspective lyrics can get back on track. “Never” starts with the lyrics, “It is the voice of your laughter that echoes in vain // In the vessel of your sorrow and pain // It is the beat of a heart that you hear in your mind // Something’s missing, but you cannot explain.”

Ozzy’s 80’s vocal styling seemed to do the dual work of both being very definite, but never really (to my knowledge) being duplicated. While his Black Sabbath vocal stylings are much more preferential to me, his appeal to the glam metal era. He thrived professionally, even if he went through tough times personally. The Ultimate Sin with only two singles, and only one of those two that’s really memorable (“Shot in the Dark”), still was certified double platinum in the U.S. in 1994 (for reference Scream, his most recent album has world album sales of 500,000).

It’s weird to me that “Lightning Strikes” didn’t get more attention (like, being a single) during the original release of the album, because honestly it’s really good. The chorus is infectious as fuck:

The guitar chug through “Lightning Strikes” is classic for an Ozzy solo album. The second lyric of the song goes: “You know I take no prisoners // My back’s to the wall // You know I must be going // When destiny calls.”

Near the end of the song, before the last lyric and chorus, Ozzy sings, “It’s only rock & roll.” And this sort of solidifies for me that parts of this album are definitely calling out the PMRC on what was their horrendous bullshit. For me “Lightning Strikes” is the best song on the album.

“Killer of Giants”, which is the next track on the album, makes me take pause to the meaning of “Thank God For The Bomb” and wonder if it was all tongue-in-cheek. Dating back to “Hand of Doom” Ozzy has sang anti-war songs. The opening lyric for “Killer of Giants” are: “If none of us believe in war // Then can you tell me what the weapon’s for? // Listen to me everyone // If the button is pushed there’ll be nowhere to run.”

“Killer of Giants” like “Lightning Strikes” before it is another great, yet underrated, track. It doesn’t make sense. I’m not really from the era when albums came double sided, but when they did, weren’t the better tracks supposed to go on the first side? The chorus on this song, and pardon the pun, is killer: “Killer of giants threatens us all // Mountains of madness standing so tall // Marches of protest not stopping the war // Or the killer of giants // The killer of giants.”

Between the faster paced chorus and the heavily-enunciated lyrics. It seems as if Ozzy is really trying to emphasize what he’s saying in this songs. He doesn’t want you to mishear or misunderstand a single word.

Halfway through the track Jake E. Lee gets a rare solo, which is pretty good, but nothing special. In fact about a minute and a half of the song is just instrumental, which is fine by me since this album was mainly written by non-vocal musicians.

The best guitar work on the album takes place at the beginning of “Fool Like You”. I also like what Ozzy does with his vocals on this song.

Do I even have to write about the closing track? Obviously “Shot in the Dark” written by Phil Soussan, is a great and memorably track.

Ultimately, the second half of this album picks up the slack from the slow start of the album. The second side starts with my vote for the best track of the album and finishes with its most memorable track.

I rate this album 3/5 Ozzy-headed bats.