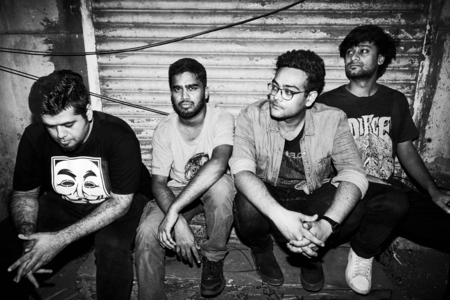 Pacifist from India are a spectacularly energized post-hardcore band who cite Drive Like Jehu, Snapcase and La Dispute amongst their influences. I am hearing some RAtM in the incendiary vocals. The band have a very worth your time new EP called Greyscale Dreams that evokes dismay at the current alienating circumstances of human constructed social evils, a cry of unrest and powerful riffs. It would be very cool to see this band live as their electricity leaps out of the speakers and must be pretty fierce in person.

Pacifist are more than ready to launch their brand of hardcore music firmly in the global landscape, embarking on a string of shows to promote the EP, produced & mixed by guitarist Apurv Agrawal & mastered by Brad Boatright of Audiosiege Studios. The EP artwork & booklet features strong, impactful shots that serves as a carefully constructed tapestry of city life in Mumbai in different locations & settings, shot by Abheet Anand & designed by Sanjana Bhatt of Blankfound.

Their debut EP launches digitally on the 16th of June, and the band has been working hard touring across India in support of their upcoming release.