Painmask: One-5 alive and tracking with Joey Z (Pt.1) 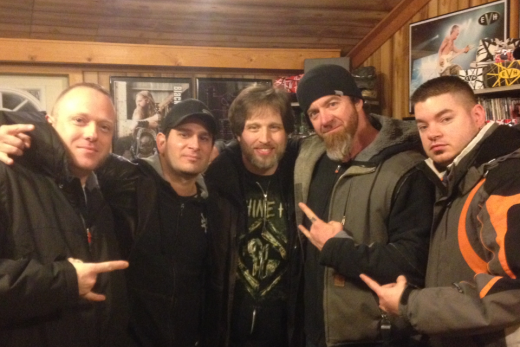 In the first piece of a series…Upstate, NY’s metalcore revenants Painmask are back with bold news. The decades long running Kingston based crew recently entered Darkworld Studio, home base of my band Antidote 8, to record 3 new songs with producer/guitarist/bad ass Joey Z (Life of Agony/Steromud) and new drummer Joe Carney (ex-Antidote 8). It was awesome to get a sneak peak of new Painmask, riffs as bludgeoning as and sounding bigger than ever. Even with a basic board mix and no EQ! Painmask recorded at Darkworld and are then mixing the stuff at Joey’s studio in NYC. It was nearly 11 years to the day that Painmask members saw Life Of Agony reconquer NYC in concert, and vocalist Jay Avery fills us in.

Jay Avery : I had met JoeyZ a few times over the years and knew of his Method of Groove studio. But it wasn’t until one night back in 2011 when the fate of the band seemed shaken. While out at a friend’s club watching the River Runs Again video,(a show which we attended) and being inspired,  Painmask bassist Carl and I had discussed possibly starting a LOA Tribute band. The next day I placed a Craigslist add. Sometime later I received an honorable email from Joey wishing me luck and vowing to share the stage at some point if I got it together. Later on I sent him our 2010 ep to see if he’d be interested in working with us. Then it was the dedication of our new drummer JoeyC that was the pinnacle for the new material. Having JoeyZ engineer this new record is a big step for us. Not only is he someone who has been on both sides of the spectrum., he’s a solid dude with an amazing work ethic!

Stay tuned! One-5! And props to Joe Carney for killing it with the Mask boys.