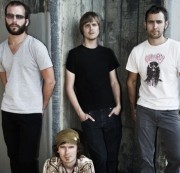 Chicago post-metal outfit Pelican are streaming their new album in its entirety. The album is entitled Forever Becoming and is set for release on October 15th on Southern Lord Records.

Forever Becoming is the bands fifth studio album and is a follow up to the 2009 album What We All Come to Need which was also released via Southern Lord.