All That Remains’ walking example of male privilege and denial Phil Labonte made a giant ass out of himself yet again by going on Infowars (Disinfowhores) and talking with pedo apologist Milo. The segment was so fucking tone deaf to what is really wrong with society as these smug trolls huffed one another’s gas. Infowars even called Phil the last defender of freedom and metal. To paraphrase Emma González , BULLSHIT!

Google exists if you want to watch the day old choad of a segment. I don’t recommend it and am NOT linking it. Labonte espouses a very fact phobic brand of Libertarian thinking, from what I have always gathered from him. Myself and a lot of LGBTQ fans of OTEP (as well as Otep herself), took him to task recently for repeatedly using “faggot” like it was ok for him to say it, ever. He even mansplained to Otep, a lesbian activist, why it is ok. Dude, fuck that.

Any label that supports All That Remains at this point should take a look in the mirror. The Madness is platforming such fucking idiocy. Infowars even said of Labonte ,“One man is fighting against the pussification of rock music.” Pussies are way stronger than you, chump.

Now Phil is on Infowars probably smirking that he gets to talk to a gay pro troll like Milo who loves offensive words and harming people or doxxing trans people. It is disgusting. Fuck your gun murder apologist nonsense. Fuck your FACT IGNORING support of Milo, who worked with Breitbart to allow NAZIS to copy edit the actual content of the site! You are officially now chumming it with an actual collaborator and basically just became one, Phil.

Milo clearly has major self hate issues he hides behind a cocky veneer, even as he helps people who hate gays.

The REAL freedom in metal is being fought for by anti fascist bands who want more representation, more diversity, more lgbtq, women, POC. Not by your smug cis white male know it all metalcore pop bullshit. I don’t even dislike ATR’s music. I like a lot of poppier metal and rock bands like Pop Evil or Halestorm or Baby Metal, for example. What I don’t like is people helping Trump culture where nothing matters flourish.

Here is an article about how the 2nd Amendment was ratified to PRESERVE SLAVERY!!

God bless the Parkland kids for having more guts than most of the media and the “let’s debate this like adults” wishy washy generation that gets steamrolled and falls for Republican tricks EVERY TIME! Fuck Bi-partisan compromise on kids being murdered. The NRA are literally buying politicians like Marco Rubio who trade dead kids for dollars and in ground pools and cars and then dare to feign like they care to the survivor’s faces.

We should change the names of AR-15s to “Marco Rubio” because they are so easy to buy.

Talib Kweli refused to play the Riot Room in KC after he learned the venue supported booking black metallers Taake. Taake claim to be just about shock rock and used a swastika onstage once. Sorry, but bands who do that shit SHOULD get dragged about it for the rest of their careers. It should have heavy social consequences, not something to chuckle about over at Decibel Beer Fest to your chums and say ,”Remember when I used to flirt with symbolism that millions died because of. I’m so edgy.”

Phil, if you think you are more of an activist than Talib Kweli, I have REAL news for you. And like Otep, I am not entirely against responsible gun owners, but we do NOT have that as our general policy in America. The laws are wayyy too easy. Teens can get an AR-15 easier than a car? Fuck you.

Anyway, it was cool to talk to Talib today on Twitter where he was fighting with a racist black metal apologist and he reshared a few of my tweets I hope y’all will check out. Shout out to Dawn Ray’d.

Anyhow, yeah… if you think Taake isn’t racist, THIS was their official response to being called on it years ago: 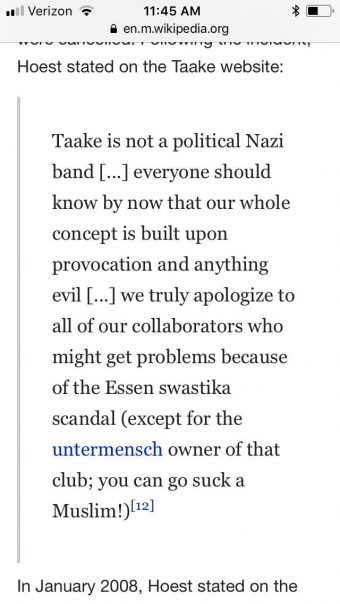 So yeah, let’s stop allowing bands like Taake and All That Remains to coast on a free pass for being dumpster fires in the name of “free speech.” It is not “SJWs” that are ruining society by hoping we are more inclusive and kind to one another or that our kids aren’t mowed down for NRA profits.

Phil, if you can read, here is an article DECIMATING every talking point the NRA ever spouts. Eat shit, all of you murder apologists. Or go run away from the shots fired like the “good guy with a gun” guard who was afraid to go into the school to save the Florida kids as they were slaughtered, despite being armed.

Oh, and to hell with Chris Barnes for thinking those kids included crisis actors. You are extra cancelled. Never supporting you again. Or Megadeth. Or Danzig.

I also know people can change over time. But one way to get the benefit of the doubt is to seem like you REMOTELY GIVE A FUCK! Not by being a “well, actually” defensive mansplainer after kids are massacred.

Too many great bands these days exist who aren’t shit heads to bother with continuing the careers of outdated moronic meatbags who help enable the worst aspects of America with their ignorant political views. I am done. Billy Corgan said that “SJWS” are the same as the KKK. Eff the Pumpkins reunion. Done.

Wayyyyy over the toxic fact resistant apologists out there in rock and metal. Get a life and help make life better for the World, not centering trolls, nazis, gun nuts and fuckbois.

A school shooter doesn't give a shit if you are a democrat or a republican. This should concern us all. It could be your child.

More On: Metalcore, General News, All That Remains, Razor And Tie Records
share on: