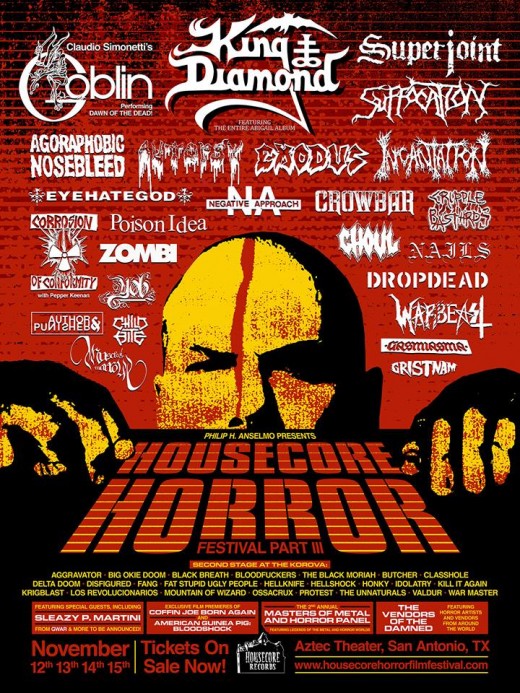 In just a little over a month, Philip H. Anselmo’s HOUSECORE HORROR FEST will terrorize San Antonio. Now in its third year of audio and visual pandemonium, this year’s multi-stage gore gala will take place at the Aztec Theater, The Korova and the Holiday Inn Riverwalk Hotel on November 13th -15th, 2015 and features three film-screening rooms, multiple vendors, special artist signings, the return of The Metal Masters And Horror panel with special appearances from performing bands and legendary filmmakers throughout the weekend as well as what’s mutated into one of the most punishing live lineups of the year!
For the onscreen carnage cravers, this year’s edition of HHF includes 80 eye-gougingfilm screenings throughout the weekend. Having sifted through a record-breaking amount of independent film submissions, the HOUSECORE HORROR FEST plague-bringers narrowed it down to 45 gems from filmmakers around the globe, including Israel, Brazil, Poland, Spain, Canada, Denmark and more. Anselmo added to the banquet of visual grotesqueries, reaching deep into his personal vault of repulsions to bring fest goers a variety of personal horror favorites including Cannibal Man, Don’t Torture A Duckling and Baba Yaga.

HOUSECORE HORROR FEST III will also include special guest appearances by GWAR’s Don Drakulich aka “Sleazy P. Martini” who will host a special screening of Skulhedface and a secret bonus film that GWAR fans won’t want to miss. Other bonuses include a onetime screening of cult classic, Children Shouldn’t Play With Dead Things with original cast members Alan Ormsby and Anya Cronin in attendance, a premiere of a never-before-seen short film from Coffin Joe, the world premiere of the controversial, gore-tastic American Guinea Pig: Bloodshock, a special director’s cut of zombie-Viking-black metal-biker film, Saga, starring Ted Skelljum of black metal icons Darkthrone and an appearance by iconic bodybuilding champion/actor/songwriter/screenwriter/musician, Jon Mikl Thor, who will be screening his new documentary followed by a performance on The Korova stage. Additional special guests include comedian Dave Hill from the Metal Grasshopper films, Texas Chainsaw Massacre 2 star Bill Moseley, and more!

Comments Anselmo of the upcoming festivities, “This may be our strongest film lineup yet. I can’t wait for people to come and have their minds blown! We’re screening some crazy shit this year. And obviously we’re showing [late HOUSECORE HORROR FEST co-founder] Corey [Mitchell]’s favorite movie as a tribute to him, Henry, Portrait Of A Serial Killer. We’re also trying out a VHS swap meet this year, which I’m looking forward to. And we’re bringing back our late-night VHS Vomitorium, which will screen obscure VHS gems.”

Official second stage and film schedules will be posted on the website soon!

Tickets for HOUSECORE HORROR FEST III are currently available at THIS LOCATION.
Further surprises to be unveiled in the coming weeks. Until then, suffer.