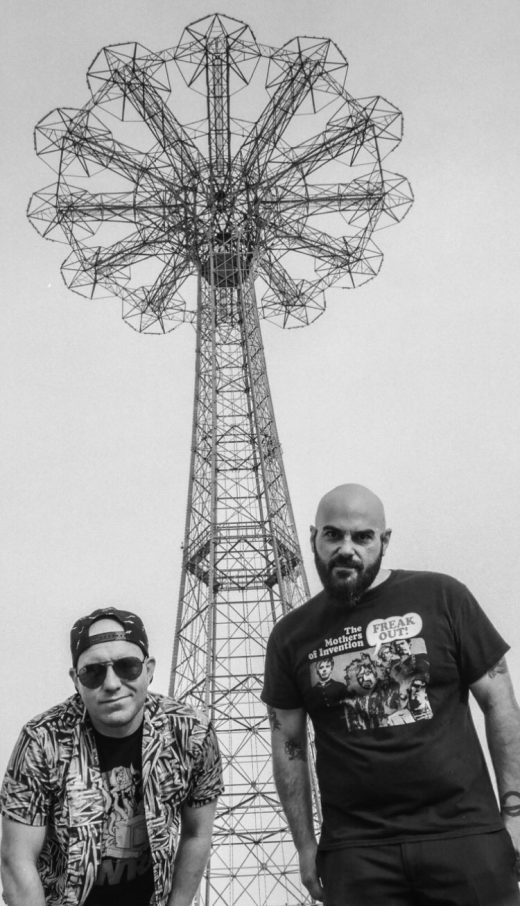 CINEMA CINEMA join us today with a new track! The band sometimes sound like Attila Csihar got into devilish mischief inserting hidden messages into back alley Sergei Prokofiev compositions instead of smoking a doob and listening for Satan’s commands in the bridge of “Stairway To Heaven” like normal rockers, so I was excited to see what they have cooked up next! The answer is…”Bratislava”!

The nine minute song is an enthralling exploration of feel and musical adventurousness as the band weave through dynamic peaks and valleys during their at times relaxing and at times anxious (but entirely intriguing) journey. At times it comes off like a Pinback and Don Byron slow burn mescaline voyage, which is obviously fucking amazing.

“Things got chaotic in our attempt to leave after the gig in Bratislava, on tour a few years ago. I had to walk out into a lane of oncoming traffic with my hands up, to plea for a halt. Seemingly no way possible to back the van out otherwise. There was a protest outside of a castle a few blocks away from the show, which at first sounded ‘cool’, but wasn’t after all. People and cars flooded the streets. Our place to crash for the night fell through, now we needed to leave Slovakia and drive to Vienna to sleep. We finally made it out and got to a quiet stretch of road over the border, then heard sirens. Pulled over by Austrian Law Enforcement. It was a saga. Deserved a song years later.”

CINEMA CINEMA was established in 2008 by Brooklyn-born cousins, vocalist/guitarist Ev Gold and drummer Paul Claro. They’ve been described as “experi-metal punks” by the Village Voice, a “jolt of adrenaline” by BrooklynVegan, and “feral and unrelenting” by Big Takeover.

In 2019, the duo joined with Nefarious Industries to release their fifth album, CCXMD. Taking a stylistic left turn from any previously recorded output, they found themselves delving into ambient and atmospheric free-jazz territories. CINEMA CINEMA invited reed aficionado Matt Darriau – best known for his work with Grammy award-winning world-music ensemble The Klezmatics – to join the group for the collaborative, entirely improvised affair. Darriau had been a guest on the band’s 2017 LP Man Bites Dog, providing saxophone on a handful of tracks. The album was described as, “no-holds-barred punk-jazz,” by Brooklyn Rail, and, “as intelligent as it is unintelligible,” by Invisible Oranges.

CINEMA CINEMA now presents their sixth full-length, CCXMDII, which serves as companion and conclusion to 2019’s CCXMD. Woodwind expert Matt Darriau returns, bringing along more tools from his repertoire as the trio submerge themselves in the strange beauty of chaotic sound, found together in the moment. CCXMDII was engineered, mixed, and mastered by Vin Cin at Electric Plant Studios in Brooklyn, New York, with artwork, design, and layout by Lauren A. Kelley.

Nefarious Industries will release CCXMDII on CD and all digital platforms on August 20th. Find preorders including merch bundles HERE and watch for additional audio previews and more to post over the weeks ahead.

Touring extensively through the past decade, CINEMA CINEMA has performed over four hundred fifty shows across eleven countries. The duo has toured numerous times alongside SST Records founder Greg Ginn, including a fifty-plus-date 2014 North American tour opening for Black Flag, select dates supporting Black Flag in 2013, and shared dates in 2010, 2011, and 2012 with Ginn’s other outfits The Royal We and The Taylor Texas Corrugators. In addition, the band has half a dozen European tours to their credit, including a 2013 stint in support of Martin Bisi Band and a run of Summer festivals in 2016.

CINEMA CINEMA appears in and has contributed music to the critically acclaimed 2014 documentary Sound And Chaos: The Story Of BC Studio. The band was also included on BC35, a celebration of the 35th anniversary of BC Studio – alongside members of Swans, Sonic Youth and other studio alumni, released via Bronson Recordings in 2018.