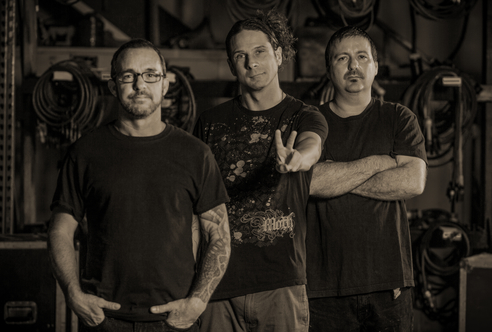 We’ve got a special video premiere for you hard rock fans today! Two Inch Voices from Florida are here to bring you their big melodic guitar groove rock that Deftones , Quicksand and O9mm fans will eat up. I even hear a little bit of stuff in the guitar work that reminds me of Shift or Seaweed or something like that. The music might be a blend of emotionally searching and aggro, but the video looks like it was a lot of fun. Hey, Florida does have a lot of sunshine so we can understand if the band went for a 311 goes to the MTV Beach House kinda vibe, haha. It’s cold as fuck in NY where I am right now and I wish I was moshing and jumping around a big ass pool!

We spoke to Jeff from the band about the creation of this moment.

Jeff: Writing “Downstroke” was a blast! It started with Gary (Bass/Vocals) and I jamming on acoustics, at his house. Gary started playing this melodic staccato, riff, I knew it was something; 1.Because he’s playing it, 2.Because it moved really well. So we jammed on this for a minute or two. (this part will eventually become the verses.) So Gary asks if I had anything for the chorus, and because the drive of the song is so good, I wanted to keep the momentum going; so I chopped the riff and went full strum. This took the song to a whole other level! I love how larger than life it sounds and feels! It’s as if whatever you were feeling just lifts away. Aaaaand if you couldn’t tell the bridge/ breakdown parts are our Metal/Hardcore roots shining through. I mean who doesn’t love a little Metal or Hardcore in their musical diet? Haha. I mean really.

I digress, but yeah by the end of the night, we had the song structured and recorded. We brought the song to our drummer at the time, recorded the song instrumental; I took it home and wrote lyrics. The first thing that came to me lyrically was the chorus, “We shine/we shine like diamonds, above a blackened time!” Once that was in my head, I knew the rest of the song would write itself. The chorus means more than anything else I say in the song, maybe to me. Because we are all diamonds and sometimes the world can be dark, and extremely brutal, that’s when we have to SHINE and SHINE the brightest.

Jeff: Oh man, making this video was out of this world FUN! It helped that Gary and I knew what we wanted for the theme, when we finished writing the song. Haha. That throwback vibe! So we had somewhere to start, and it took us a while to get our location though. In our part of Florida, you don’t have many two story homes, and this was real important for the look of the video. After a couple months of searching and talking to people, I finally posted a sort of ad on my timeline; “Looking to borrow a 2 story house for 5 hours, to shoot a music video.” Yes this is what it said. Who’s going to respond to this, right? But what else could I do? This video was going to happen! Sure enough, not even 10 mins later, this very cool cat from the band “Things Nocturnal”, offered to help. Unbelievable! It was just like that. He invited the band over to look at his place, and we set a date to shoot right then and there. When you or anyone watches the video, they’ll see why.

The video team was led by my very good friend, (Producer/Director/Editor/The Man) Ryan Sousa of Film Native in Tampa, Fl, in collaboration with M90 Studios. Ryan and I have been friends for a while; he did Two Inch Voices’ first video “Into Oblivion”, in 2010. So when Gary and I were talking about videos for the new single, it only made sense to introduce Gary to Ryan. After that meeting, we began sharing ideas and really working together to make something wonderful. And I believe we’ve done that. We’ve made something wonderful.