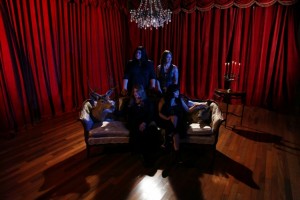 “Sin Eating still exists as a death ritual where the Sin Eater consumes a meal or ‘corpse cake’ that is passed over the body of the deceased or laid on the chest,” Force explains. “The meal represents the sins of the deceased and once consumed by the Sin Eater the sins are released thereby allowing the soul to rest in peace. The album speaks of this process of taking on the pain of others to set them free.”

In honor of 20 years of the mystifying group, the label Prophecy Productions will also be releasing a new set  Anthology  at the same time as the Bay Area chamber group’s new Sin Eater record. It consists of twelve CDs, containing the band’s entire work including numerous compilation tracks, singles and more partially unreleased bonus songs, topped by an accompanying 80-page book bound in leather with all lyrics.