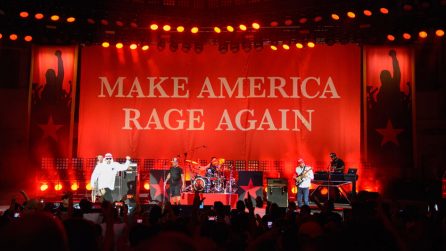 Prophets Of Rage featuring Public Enemy, RATM and Cypress Hill members have released another new single from their pending September 15th very anticipated Earth mover. I’m liking this one “Radical Eyes” a bit more than last single “Living On The 110”. Brad’s pocket/shuffle beat are dope and Chuck D is real strong on this one pointing out the idiocy of the alt-right’s attempt to paint anyone with a semblance of sanity as an extremist.

“The Western world has created biased structures and stereotypes. Opposing viewpoints and movements are seen as radical rather than diversity. ‘Radical Eyes’ is the lens everything is viewed through, any life movement in opposition is considered radicalized.”

‘Make America great again. Turn back the clock to a time when privileges of whiteness were supreme and unassailable, misogyny was simply viewed as an extension of masculinity, women got back-alley abortions and worked for partial wages, coal was king and global warming was purely academic, and trans people weren’t in our bathrooms or barracks. The good old days.’ – Charles M. Blow in The New York Times

Shout out to DJ Lord for retweeting a Maxine Waters tweet I posted the other day, btw. That made me stoked.

I for one am stoked as heck for this record. I can’t believe the racist bullshit STILL festering in this country. When I was a kid my friends and I didn’t give a fuck what color or gender or sexuality a band was as long as their music was dope, be it Living Colour or L7 or Pansy Division. That’s part of why when people talk shit on RHCP for being famous now it is like ,” get a grip.” You know how many white ass people the Chili Peps got to appreciate P-Funk?

Anyway, turn this shit up!

More On: Alternative Metal, Music, Rage Against The Machine, Epic Records
share on: