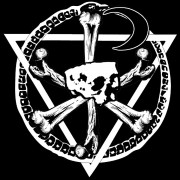 Indiana black metal conjurers Ptahil have emerged from the Temple Of Da’at Studios once again with seven new songs for an upcoming full-length slated for release through Wraith Productions later this year. Further details to be announced in the coming weeks.

The band is also gearing up for run of live rituals across the United States in support of their For His Satanic Majesty’s Glory offering, unleashed in North America last November and in Europe in January. Get the current dates here.

More campaigns are in the plotting stages and many more will be added.

Hailed by fans and critics alike, For His Satanic Majesty’s Glory is a transmigration through chaotic boundaries never before unveiled and an imposing assault of Satanic doom/punk/black metal on the senses, composed and recorded in complete adversarial ritual