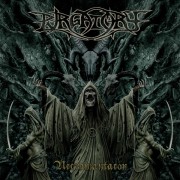 German death metallers, Purgatory, have released a music video for their song “Downwards Into Unlight” off their newest album “Necromantaeon.” This is the first professionally shot video of the band and it was directed and produced by Dario Light and Lucio Light.

The new album was released in February 2011 through War Anthem Records.