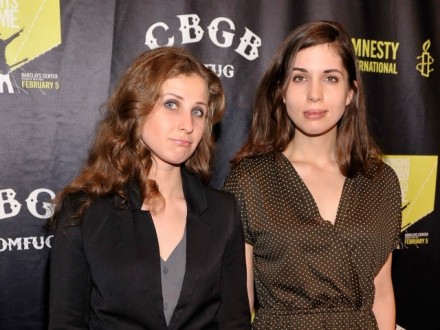 Pussy Riot’s first song in English is dedicated to Eric Garner and the words he repeated eleven times before his death. This song is for Eric and for all those from Russia to America and around the globe who suffer from state terror – killed, choked, perished because of war and state sponsored violence of all kinds – for political prisoners and those on the streets fighting for change. We stand in solidarity.

This is not metal but merit worthy. We have a punk category and are associated with DyingScene.com and Pussy Riot are punk by any standard, though the new Eric Garner inspired clip, the band’s first in English, is more akin to (actually a lot like) Jarboe singing over a lazy and drifty indie hip hop beat. I found the clip really moving and unsettling. It is nice to see solidarity. Police need to disown the kind of actions in the Garner case because it reflects unfairly on the good officers trying to do their job. Richard Hell of all people even reads Garner’s last words near the end.

In an e-mail to Buzzfeed, Pussy Riot members Alyokhina and Tolokonnikova explained that Russian uniforms they wear in the video equates to how “illegal violence in the name of the state kills not only its victims, but those who are chosen to carry out these actions.” They added: “Policemen, soldiers, agents, they become hostages and are buried with those they kill, both figuratively and literally.”

Recently six members of Pussy Riot signed an open letter on the collective’s blog publicly severing their relationship with Maria Alyokhina and Nadezhda Tolokonnikova, who were famously jailed for staging an anti-Putin protest outside a Moscow cathedral. Details are HERE. While I understand the anti-commercialism aspects to their concerns, I agree with Alyokhina and Tolokonnikova that their causes are important enough to be in the “mainstream” discourse and that anyone can be “Pussy Riot”.

Watch the chilling “I Can’t Beathe” BELOW.