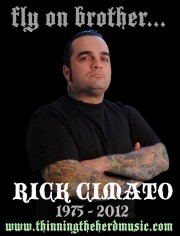 The talented always seem to go while the putrid remain. It sucks to write about the loss of yet another great metal musician and person, Rick Cimato. I was a big fan of Locked In A Vacancy and got to loosely know the guy from the NYC rock scene. Rick was killed by a drunk driver over the holidays. This fucking stinks and never needs to happen. The poor guy was on a great climb and had just recorded with Steve Albini, for God’s sakes.

The memorial is just a few hours away but I wanted to throw something up on this site quick and send Metal Riot love and respect to the band, family and friends. R.I.P. Rick.

From the official release:

Rick Cimato, drummer for NYC stoner metal outfit THINNING THE HERD and previously of Locked In A Vacancy, was tragically killed over the holidays in a car crash. Cimato was on his way home from visiting relatives in Maine, when the head-on collision took place in Connecticut.

Last week THINNING THE HERD founder Gavin Spielman issued the following statement via the band’s Facebook page about Cimato’s passing: “Being in a band is about being friends. In shock and in tears over the loss of my friend and bandmate, I have to think of the band. I named the band THINNING THE HERD when my father Steven A. Spielman passed, to cope with the loss. Rick would want me to keep writing for Thinning the Herd. If stop, I would not be doing his legacy service. His drumming on the new record is some of the best rock I have heard, and I want you guys to hear it. Thank god for this guy, what a gift as a friend, brother and band mate. For anyone who jams with others, anyone who lets another into that higher conscious world – you might understand the depth of how one can integrate and nurture the spirit.”

Cimato’s distraught bandmates have set up a memorial for their fallen brother, set to take place this Sunday, January 6th at The Grand Victory [245 Grand St., Brooklyn] at 6pm. The memorial will be hosted by members of Gods Green Earth, Locked in a Vacancy, Nassau Chainsaw, Hickory Hawkins and of course the remaining members of THINNING THE HERD. Full info is available HERE.

This special gathering will also serve as the public’s first listen to the newly-completed THINNING THE HERD album Freedom From The Known. The trio recorded the album with acclaimed producer Steve Albini over the Summer, and have just wrapped up the mastering on the album. Previously slated for a late 2012 release, the album will now be released on February 5th via Saint Marks Records.

THINNING THE HERD this week posted the third track from Freedom From The Known via their Soundcloud page. Check out the soulful thunder of “Sludge” RIGHT HERE.

More News On Thinning The Herd: