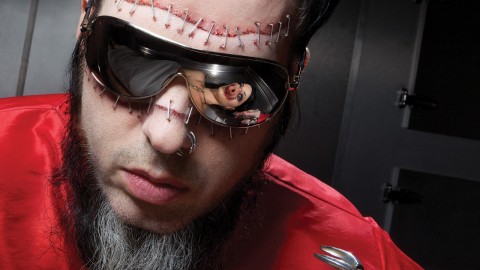 WAYNE STATIC was the enigmatic former frontman and namesake of Static-X, who later forged a successful solo career. Wayne was scheduled to co-headline tours with Powerman 5000 and Drowning Pool over the next several months.

No additional information is available at this time.

Blabbermouth has a moving tribute from fellow musicians in the hard rock community here , including members of Smashing Pumpkins, Fear Factory and Lacuna Coil.

Today is a sad day in the music industry – Front-man and founding member WAYNE STATIC of STATIC-X passed away quietly in his sleep at his home last night.

The couple was getting ready to leave for a Fall/Winter tour this morning. They were to have left the night before on Halloween, but decided they would head out early in the morning November 1st.

The couple, known for partying heavy, had left hard drugs in 2009 and had not touched them since. Static’s first solo album – Pighammer – was a tribute to his new non-drug life and hoped it would help others to get clean from hard chemical drugs.

More official information about his passing will be released in the following days. This is not a drug related incident or an O. D. Please be courteous to his family and wife and leave positive messages~