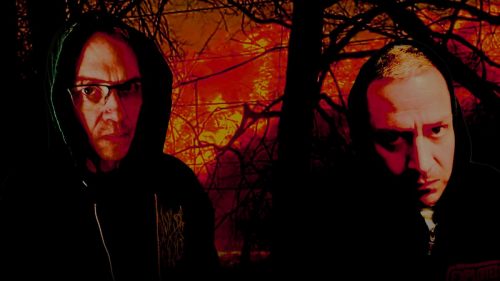 When Swans released Soundtracks For The Blind back in the day it was hailed often as a type of soundtrack to a non-existent film. A similarly immersive experience awaits those who dare to tread the seventy three minute new collaborative piece by NYC’s experimental artists RACK and GRIDFAILURE, subtly entitled The Sun Exploded. Rather than a non-existent film, this one reminds us more of watching Tetsuo: The Iron Man on PCP.

There is a lot of great new stuff out today (as usual for Bandcamp Friday) from the one man Viking dreams of Feskarn’s Raven’s Way to a new extra chill Soft Kill two song release to Sweden’s progressive sludge metallers Vokonis’ new ominus banger “Blackened Wings”. This Rack and Grid team up us by far the scariest, however.

The Rack (Jon Paris) contributions are about a decade old, files that Dave Brenner of Gridfailure then manipulated and wove amidst his unique process of noise sculpting to create not just a seamless call and response but an altogether new uncharted territory. Power electronic ritual sacrificial bloodbath ensues over more traditional elements for a thrilling and terrifying end to the sliver of hope you had left for an anxiety free day!