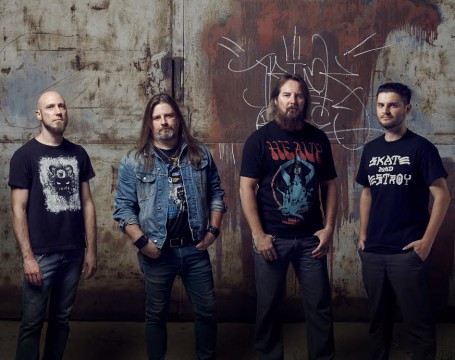 North Carolina-based BEDOWYN to release full-length album ‘Leave the Living\’ worldwide on October 30, and will initially be available through their BandCamp site.

In September 2014, the band set out to create the follow-up to their well-received debut EP. Expanding greatly on the bedrock sound they had established, further exploration has yielded eleven well thought-out tracks that showcase their nomadic and heavy sensibilities. Conceptual in design, the recording has been crafted in the traditional structure of a side A/side B album that harkens back to the groups\’ early metal roots.

Founded in the fall of 2011 by Mark Peters, Todd Parham, Alex Traboulsi, and Marc Campbell, Bedowyn (pronounced Bedouin) infuses elements of classic metal, thrash, doom and Sabbathesque riffs into a powerful and multi-facetted sound accompanied by lyrics about mankind\’s dark side and the human struggle. Their pan-metallic fluency helps Bedowyn avoid monotony, but it also makes their music more inviting. Brushing aside subgenre purism, Bedowyn’s heretical embrace of all things heavy leaves room for fresh inspiration.  Bedowyn spent two years honing their sound before issuing 2013’s five-song debut EP, \”Wolves & Trees”. Their patience served them well as it was met with critical acclaim from the metal community, drawing comparisons to Mastodon, High on Fire, Sabbath, and early Metallica. The closing track, \”Snarling Of Beasts”, is a featured bonus song in the 2014 edition of the RockSmith video game.