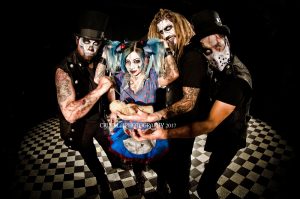 Alt Metal L.A. spooky groovers Raven Black have premiered a new video “Twinkle Twinkle Little Scars” over at Revolver HERE. The song comes from the theatrical group’s recent Seven Sins EP, which found the band working with esteemed producer Ulrich Wild and is set to be followed by a full length this year. The band dip their toes into the pool of West Coast Nu Metal ala Coal Chamber meets Suicide Squad visually but also have a punkier sound going on that fans of, say, One-Eyed Doll or Jack Off Jill will certainly be likely to dig. Check ’em out!