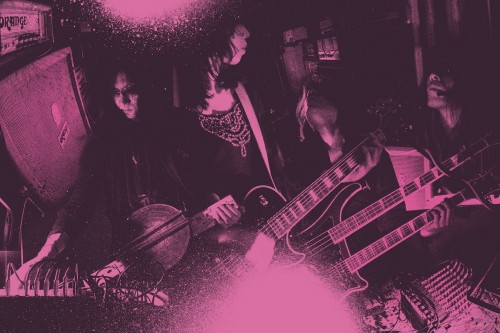 I was just bitching about being unsure how on Earth I will whittle down my year end list to a reasonable number this year in the face of so many rad records when news broke about Relapse releasing a pending new collaboration between legends Boris and Merzbow. Seeing Boris live ought to change anyone’s life and I even got to chat with Jim Jarmusch about how cool they are once when I waited on him at a restaurant I used to work at, The Depuy Canal House. Anyhow, thankfully Gensho, the new collaboration, does not street until next February so I don’t have yet another contender for my year end list. After August every year I start freaking out counting down to December and become impossible to be around.

Anyway, any decent weirdo worth their salt knows Merzbow is a noise legend and Boris know no limits when it comes to creativity. In a noise rock/avant pop climate where awesome stuff is being done again by bands ranging from JC Satan to Tearist to Pigs and Fad Nauseam, it is rad to know some of the scene stalwarts are still cutting their teeth on pushing boundaries as well. Deets on Gensho can be read BELOW.

Renowned Japanese innovative team BORIS WITH MERZBOW has completed recording a new collaborative full-length LP entitled Gensho, which is Japanese for “phenomenon”. Gensho is a unique release featuring over 150 minutes of new music spread across two discs. The BORIS tracks are new reinventions of the band’s classic songs, while the MERZBOW songs are new compositions. BORIS and MERZBOW have each contributed exactly the same amount of music, with the two discs intended to be played at the same time on physical speakers at varying volumes so that the listener can experience their own “gensho/phenomenon” every time. The artists also commented, “Of course you can enjoy both albums separately, as a separate work.” Gensho is slated for a February 2016 release via Relapse Records.

Though the artists have an extensive history of collaborating with one another, this latest effort was born out of a one-off show in 2014 for Boiler Room TV, when the two acts decided that their set from that day was worthy enough to perform in the context of a proper studio recording. As with every BORIS and MERZBOW release, the only thing to expect is the unexpected. Each artist’s individual contribution to Gensho weaves through countless disparate textures with a varied sonic palette, to say nothing of the effect when both records are played simultaneously. The unique presentation of the album lends it near-infinite potential for aural discovery, and encourages direct interactivity with the listener rarely found in such unconventional music.

BORIS WITH MERZBOW have also announced an exclusive one-off show in Tokyo in support of Gensho this November. More details about Gensho including album art, tracklisting and song samples will be revealed shortly.

About BORIS WITH MERZBOW:

Both BORIS and MERZBOW are well known for numerous collaborative works with a plethora of artists, but have been working together since 1997. They have released three studio albums together (Megatone, Sun Baked Snow Cave and Klatter), two live albums (04092001 and Rock Dream) and one 12″ EP (Walrus/Groon). Musically, BORIS helps to shape MERZBOW’s wall of noise as a composed musical score with structure, and to make it easier to access the noise master’s music while MERZBOW adds an extreme high frequency to BORIS’ signature heavier sound.

Masami Akita, better known by his stage name MERZBOW, is a Japanese noise musician. Since 1981, he has released over 400 recordings. The name MERZBOW comes from German dada artist Kurt Schwitters’ artwork, Merzbau, where Schwitters transformed the interior of his house using found objects. This was chosen to reflect Akita’s dada influence and junk art aesthetic. In addition to this, Akita has cited a wide range of musical influences from progressive rock, heavy metal, free jazz, and early electronic music to non-musical influences like dadaism and surrealism. Since the early 2000s, he has been inspired by animal rights and environmentalism. In 2000, Extreme Records released the 50 CD box set known as the Merzbox. Akita’s work has been the subject of several remix albums and at least one tribute album. This, among other achievements, has helped MERZBOW to be regarded by some as the “most important artist in noise”.