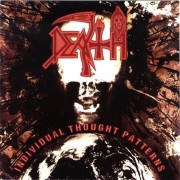 A remixed, re-mastered version of Death’s “The Philosopher,” taken from the forthcoming re-issue of the 1993 album “Individual Thought Patterns,” has been posted online now via the official Death Facebook page here.

The album will see it’s official re-issue on October 25th in North America, October 28th in the Benelux / Germany, and October 31st in the UK and rest of Europe. The album will be released via Relapse Records and has been remixed by Alan Douches. It will be re-packaged to include a second and third bonus disc of previously unreleased demos and a full live set recorded in Germany during a 1993 European tour. Also included on the third bonus disc exclusive to this re-issue are rare riff tracks from the Chuck Schuldiner archives.