“Repentless” has highest ever chart debut in Slayer’s 32 years 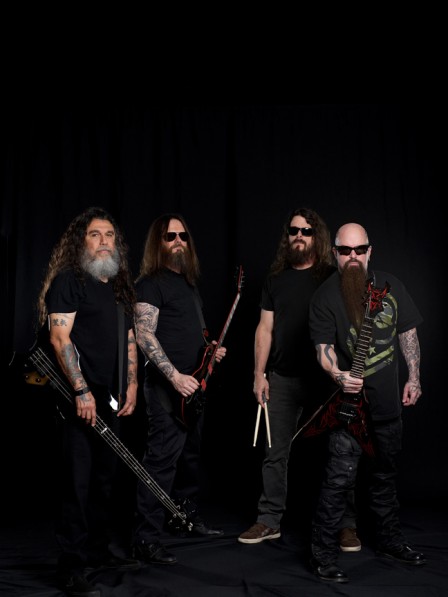 Repentless, the 12th studio album from the iconic thrash/metal band SLAYER and the first without beloved founding member Jeff Hanneman, makes the highest Billboard debut in the band’s 32-year recording career, coming in at #4 on the Top 200 Album Charts and scanning 50,000 units. Slayer’s Christ Illusion had been the band’s highest debut, premiering in 2006 at #5. Repentless, the band’s first album produced by Terry Date (Slipknot, Soundgarden, Deftones), also lands at #2 on Billboard’s Current Albums, Top Rock Albums and Hard Music charts.

“The entire Nuclear Blast global team thanks Slayer and their loyal fans everywhere for the tremendous first-week success for Repentless,” said Gerardo Martinez, NB’s General Manager, USA. “Slayer made an amazing album that stayed true to who the band is, and the fans’ overwhelming response is proof of that.”

“Repentless,” the album’s first music video, made its premiere on the album’s 9/11 release date and has since logged more than 1.9 million YouTube views and is north of two-million views on Slayer’s Facebook page. The video was directed by BJ McDonnell (“Hatchet III”), filmed at the Sybil Brand women’s prison in East Los Angeles, and features copious amounts of blood, grizzly murders, and cameo appearances by some of Hollywood’s most recognized anti-heroes, including Danny Trejo (“From Dusk Till Dawn”) and Tony Moran (“Halloween”).