Click here to read more. My day was spent at the Rockstar Energy Stage and the G Pen Mainstage for a majority of the day, although I did have a chance to walk around and catch a few other bands on different stages. The first band I caught was Atlanta, Georgia’s partycore leaders Attila.

The band was full of energy. Frontman Fronz brought his A game to the set. Attila played every party anthem song they had in their playlist including:

Payback Party With The Devil

Soda in the Water Cup

The crowd went nuts to hear the band play their latest single “Party With The Devil” it was great to see the energy behind the song brought to life on the stage. 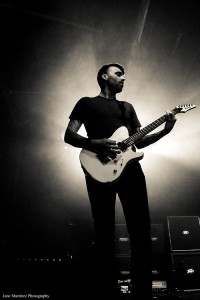 Sleeping Giant was up next on the Rockstar Energy Stage. The  band was as lively as ever. The band played their latest single “The Cross is Suicide.” The band also played:

No Sleep From My Eyes

No One Leaves This Room Sick

And a few other songs. 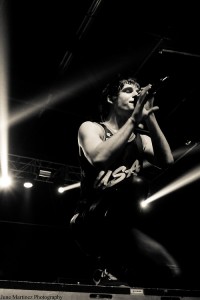 I See Stars had a very interesting set. It involved everything from spiral dancing on stage to technical difficulties. The band was extremely energetic. I’ve seen them multiple times and they have defintely gained a huge stage presence from when I had first seen them a few years back. The crowd was amped during their performance and sadly during one of the band’s intros to their next song, the sound was cut off from their microphones. It took a few minutes to get everything back together again, but the show went on and the band finished their set. 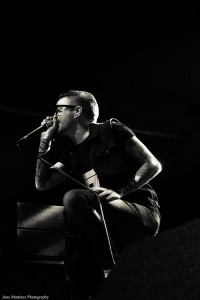 Memphis May Fire put on an amazing set. Frontman Matty Mullins gave the set his all and it showed, not only on stage, but in the crowd’s reaction to him. Memphis May Fire had the second rowdiest set of the entire day. The room was literally jam packed for their performance. Mullins had the crowd in the palm of his hand the entire time. The band played songs including:

Alive in The Lights 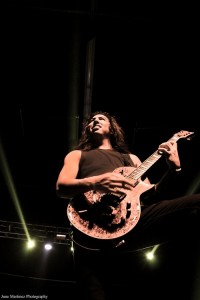 Of Mice & Men, let me take a minute to appreciate how epic this set was. Everything from the way the band came out on stage to the way their set ended was perfection. Vocalist Austin Carlile dedicated his set to the late Mitch Lucker, who recently passed on November 1st after injuries sustained from a motorcycle accident on Halloween night. Austin was emotional, as he discussed how much of an influence Mitch had on his stage presence and performer in general.

The room was the fullest it had been for any other band that had played on the Rockstar Energy Stage earlier that day. The temperature in the room went from one hundered degrees to about one hundered and sixy in a matter of two songs off the bands set list. There was not a still body in the room. Everyone was up on their feet moshing, jumping, or yelling lyrics at the top of their lungs.

The full setlist for Of Mice & Men included:

For Those in Glass Houses

Product of a Murderer

The last song “Second and Serbing” always hits a very deep emotional spot for fans, as the song is about Austin’s loss of his mother. This time was no different.

Pierce The Veil was the last band I caught on the Rockstar Energy Stage. The band being San Diego natives, it was almost a hometown show. The band ran onto stage and continued to hop around the entire time. Their energy was as good as ever, but you can see that they are maturing as performers. I’ve seen Pierce The Veil over six times and they seem to get better every time.

They have learned how to take their young energy and put it into their performance and make it fun for the entire crowd. The band had a party vibe to their set, releasing confetti among the audience at two different times during their set. Vic Fuentes, like so many others that day dedicated their set to Mitch Lucker and talked about him for a minute.

Among the band’s setlist were the songs:

Bulls In The Bronx

A Match Into Water

King for a Day

I was able to run down to the G Pen Mainstage and catch bands like Asking Alexandria who had a very bright set. They played songs off of multiple albums, which the crowd seemed to enjoy more than just hearing all of their new stuff.

Their set was decorative as they dropped down new banners depending on what album each song was off of. If there was anything that could catch someone’s attention from that stage other than Worsnop & Co’s energy it was these huge T.V. screens on each side of the stage that read “Asking Alexandria” in a blood red against a white background.

Towards the end of the set Danny Worsnop slowed the crowd down and starting talking about Mitch’s death. This was the quietest the mainstage audience had been during the entire festival, I’m sure of it.

Danny went on to say:

“You guys lost a hero that day, the world lost one of the greatest performers that Deathcore has ever seen.”

Suddenly, the members of Asking Alexandria were gone and a Suicide Silence backdrop emerged from the back of the stage and Suicide Silence’s “You Only Live Once” came blaring from speakers. Instantly the crowd roared in applause and whistles. Then, the crowd grew quiet, lighters and cell phone screens emerged in the air.

The crowd of once strangers, had now become a huge family that had come together to honor Mitch Lucker. California Metal Fest had now become California Mitch Fest. The most inspirational moment of the night was when “You Only Live Once” finished and the remaining members of Suicide Silence walked out on stage and began to talk about Mitch and his daughter. The band had no real prepared speech, one of the members noted that he “Never thought he’d be on stage discussing Mitch’s death.”

Suicide Silence announced that there will be a benefit concert to raise money for Mitch’s daughter’s education fund. The show is now in the works and will be on December 21st, because according to the members of Suicide Silence “Fuck the end of the world!” at the Fox Theater in Pomona, California. Tickets are now on sale.

Killswitch Engage was the headlining act of the night and the schedule was built to cater them and their fans. Killswitch played a full hour after everyone else’s set ended. The band played their entire Alive or Just Breathing album in honor of it’s ten year anniversary.

The set also included the songs:

The show was a blast! Although there were minor difficulties in the morning with door times and concrete set times for bands to go on stage, the festival went on and I believe everyone who was looking for a great day in the sun full of metal got what they were looking for. If you weren’t there, you missed out. With such an amazing line up this year, I’m excited to see what the people behind California Metal Fest have to bring to the table for next years show.

There will be a photo gallery up with more photographs from the show in the next coming weeks! Be on the look out for that.

All photographs by June Martinez.