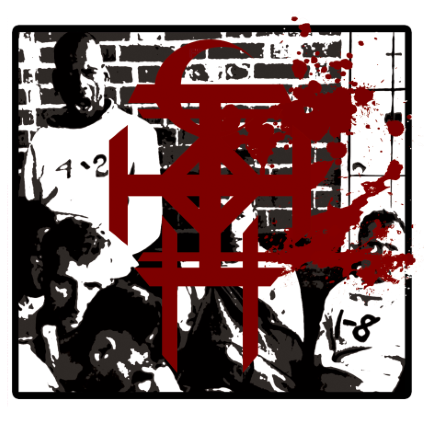 The churning soundtrack of my teens was mainly White Zombie, Big Black and
boatloads of Skinny Puppy’s Rabies and Godflesh, so hearing some music that
clanks and clamors like the dark streets and rusting edifices in the
continually overcast streets of TV’s Gotham is a refreshing throwback to the
days of Stalwart, The Mind Is A Terrible Thing To Taste and Psychic TV. But
Corrections House are not a nostalgia act in fishnets with pancake face. No,
this s the mighty group featuring members of Eyehategod, Neurosis and Yakuza
making Interzone worthy hate broadcasts via buzzsaw electronics, occasional
guitar and mind raped jazz barely tuned in through a distant rebel broadcast
somewhere on the fringe as we try to defeat Skynet. Except these songs are
about today more than a post apocalyptic future, though it sounds like the
apocalypse has arrived.

And thank God, because we really need to be slapped out of our comfort zones
in an age where emo hedge fund brats are raising the price of Aids pills and
anyone takes Donald Trump seriously as a candidate, a man who once said he’d
bang his daughter if she wasn’t, y’know, his daughter.

There is a broken romantic heart that bleeds out the tragedy of today’s
current events all throughout the music of Corrections House, a sense of not
knowing if the meds help or hinder self-realization. Live album Writing
History In Advance was scary as fuck and everything they’ve released makes a
run for the borders of sanity.

“When Push Comes To Shank” is a horn soaked stomp that sounds like someone
blowing out smoke as drums and various noises rage like a tribal beat made of
pumped shotguns and a barely contained Bauhaus influence on the surface of the
oil slick.

“Burn The Witness” is a 7:22 dirge with synth highlights that beats on your
skull like a hangover from the drums of war, while “The Hall Of Cost” starts
out with an EDM pulse before bludgeoning with even heavier vibes than Last
City Zero. “Visions Divide” is an outlaw ballad akin to some of the Neurosis
dudes lonelier solo albums, while “Superglued Tongue” sounds like a song title
(I’m assuming) Mike Williams was born to pen. That song in particular features
more of the nerve damaged and awesome poetry Eyehategod fans have always known
Mike is capable of but that many others deterred by screams simply didn’t
catch on to in the smack blues unintelligble howl of Take As Needed For Pain,
etc. There are some lower crooned non Mike vocal moments that could even fit
in next to “You Are The Stars” from Publicist UK’s recent masterpiece Forgive Yourself.

“White Man’s Gonna Lose” kicks in like dancier Front Line Assembly before
lucid nightmare horn squall and harsh vocals remind you that you aren’t here
to fuck but no one will judge you for beating your head against the wall. The
Mike and Scott vocal trade off remains pure pay off for anyone who has been a
serious underground music fan and ever followed these vital artists.

If Jim Morrison was a drunken shaman trying to break on through to the other
side than Mike IX Williams in Corrections House is like some ragged poet
Christ who has returned from the Harrowing of Hell but who has decided that he
is far too tired to fucking bother redeeming us for our sins after all, like
some “don’t forgive them Father because they do know what they’ve done and
nobody cares” trip. Then again, who made who? Right?

Or as the record asks “Who made Hell…Hell made who?”

Mostly black metal bands like Krieg, Shining (Swe), Nachtmystium or the new,
even darker Abigail Williams forthcoming monster of a record have grasped the
outstretched hand of desperation as effectively, but this is music that would
make Charles Manson flip his shit way harder than Helter Skelter ever did. It
pretty much makes most other extreme bands out right now look like ducks in a
row, like we’re all just a Vietnam flashback waiting to be blacked out at the
end of the bottle. Except there have been plenty of wars since and somehow we
just can’t die.

“Hopeless Moronic” could be KK Null soundtracking a self deprecating
hallucination if not for the Neurosis-esque guitar waves that rise and fall
throughout. “I Was Never Good At Meth” is about as approachable as the title sounds.

Just a few listens and I’m already exhausted and not sure whether to grin
through restored faith or cry from the weight of it all. This band knows how
to carry a whip, for sure.