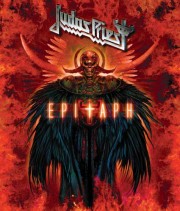 Whatever side of the debate you fall on regarding Judas Priest post-K.K. Downing, the fact remains that the forthcoming EPITAPH tour DVD is really fantastic. Part of the band’s 40 year celebration as metal kings, this is a true treat for the fans and very well done. I was lucky enough to see the tour and the setlist of songs from every Halford era album was nothing short of phenomenal. Included here are their biggest hits plus the stunning “Victim Of Changes” and a vicious version of “Painkiller” after a bad ass drum solo from Scott Travis, plus much more. The band were in great form and this concert footage captures them killing it at the London HMV Hammersmith Apollo in 2012. The date also marked the last night of their final huge scale world tour. Props to Priest and The Scorpions for really trying to take it hard to the fans with great semi-farewell tours.

New guitarist Richie Faulkner is showcased well on the DVD. Despite being a big fan of the classic priest (and also the Ripper version), Richie quickly won me over. He is just great on stage, clearly so enthusiastic and interacts with the crowd better than some veterans I have seen live. The kid has it. He is seen on this release singing along and near seamlessly sliding into the ranks. Kudos.

Highlights of this pretty much must have DVD and Blu-Ray release are many. Halford sounds fantastic despite his age, crooning, roaring and owning it. The split camera guitar  opening of their chilling version of “Diamonds And Rust” by Joan Baez is top notch. “Metal Gods” stomps home and raises goosebumps still like the true heavy metal all time anthem it is. The camera work is great and moves around a bunch but without giving you an epileptic fit. It is just a great recapturing of the tour, if you missed it. This is the biggest release of live material from their catalogue they have done and the band hold up on stage for a very long set list. The amazing thing is, it never gets boring. It is wonderful to hear the evolution from the early (and so awesome) “Never Satisfied” to the chop to the neck assault of “Judas Rising”. I just wish they played the stunning “Angel” from the ANGEL OF RETRIBUTION album as well, since it is one of my top five ever Priest songs.

“Heading Out To The Highway”, “Electric Eye”, “Rapid Fire” all burn with pride and majesty. I sat down to watch this and literally in minutes was air drumming like a fucking lunatic. Thank you, Priest for all you have done. I met a girl recently who said (as much as she loved them) Iron Maiden are the Yankees and Priest are the Mets, a band with way less fair-weather fans who are die hards for the “franchise”. With a new studio album on the way, this is a great look back with a fresh dose of energy in the line-up as well. K.K. is missed but you need to get on board with Priest in 2013. They truly are a band who can claim the word legacy and yet still have relevance and hopefully a bright future.