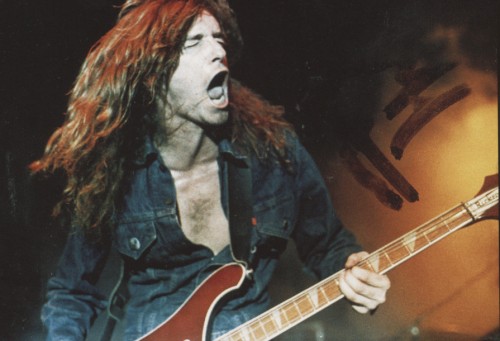 July 27 marked the 30th anniversary of Metallica’s Ride the Lightning (still arguably their “purest” metal moment). Along with original shots from the Slayer Hell Awaits album and the Exodus landmark Bonded by Blood, not to mention Possessed’s Seven Churches, the Bazillion Points photo book MURDER IN THE FRONT ROW: Shots from the Bay Area Thrash Metal Epicenter, by Harald Oimoen and Brian Lew, includes Cliff Burton’s portrait from the back of Metallica’s stunning second album.

Every photo in MURDER IN THE FRONT ROW has a pretty good story, and the background behind this particular Cliff pic is a pretty good one. Harald, who has played bass himself for almost 20 years with crossover legends D.R.I, tells the tale:

Says Oimoen: “First of all the shots almost didn’t exist. Cameras weren’t allowed at this show, so about halfway through I got mine taken away by security. They were just about to expose the film, but luckily I was able to roll it back into the canister before they were able to ruin it! I got the film confiscated, but lucky for me a buddy of mine was able to get it back. That roll had the classic Cliff shot from Ride the Lightning on it. I never received a penny for the shot, but the credit was priceless.”

For a longer excerpt from the book, tales of thick smoke with Cliff Burton, and further 1983 photos of Metallica live, visit the Bazillion Points blog:

“The definitive story of the scene and what we managed to make of it here in the Bay Area.”—Kirk Hammett, Metallica