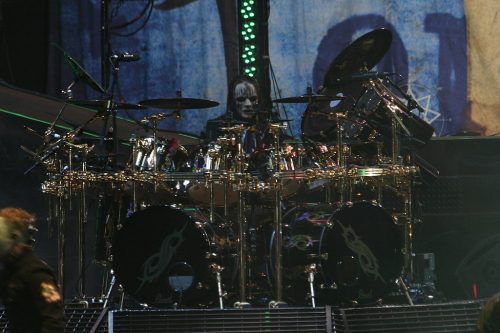 Wow, fucking shitty week for metal. Heartbreaking news, fam. I just learned on Acey Slade’s Facebook that another great has left us for the great gig in the sky. Shit, man. This feels unreal. RIP Joey Jordison. Numb with shock.

The original drummer and a founding member of Slipknot, has died. He was 46. Nobody played like that dude and with all due respect, no one can quite replicate him.

The heavy metal artist’s family announced Jordison died in his sleep on Monday, July 26. His cause of death was not disclosed.

“We are heartbroken to share the news that Joey Jordison, prolific drummer, musician and artist passed away peacefully in his sleep on July 26th, 2021,” they wrote in a statement.

“Joey’s death has left us with empty hearts and feelings of indescribable sorrow,” Jordison’s family continued. “To those that knew Joey, understood his quick wit, his gentle personality, giant heart and his love for all things family and music.

“The family of Joey have asked that friends, fans and media understandably respect our need for privacy and peace at this incredibly difficult time. The family will hold a private funeral service and asks the media and public to respect their wishes.”

This is hard. I'm at a loss. I met Joey on @Ozzfest when he still played in @slipknot. He was so kind. When I needed a drummer for #HouseOfSecrets I reached out & he eagerly agreed to play. He & I lost touch over the years & I regret that. So much. All the love to his ppl 😢💔 pic.twitter.com/c4Jsj8xJlz

Rest In Peace Joey Jordison. You changed the game with Slipknot. Brought the blast beat to the mainstream! Gave kids a groove like no other. Perseverance would’ve never happened had it not been for Joey & the Slipknot camp. Condolences to his family, friends & fans. Gone too soon

We are saddened by the news of the passing of our dear friend, Joey Jordison. From being able to share the stage with him numerous times throughout the years to Matt standing alongside him for the Roadrunner United album. He was always super gracious to all of us in Trivium. pic.twitter.com/LS8E06QT0A