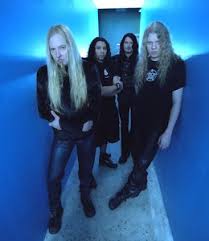 Editor’s Note: Sorry for posting this late into the night but we have been reeling over here as fans from news that Sanctuary and Nevermore metal legend Warrel Dane has passed away. Thoughts, thanks and condolences to his people.

Ok, here we go… A shocking blow to the metal world today, metal legend Warrel Dane passed away from a heart attack in Brazil. Dane was known as the singer for SANCTUARY and NEVERMORE. He was in the process of recording his second solo album when he passed.

My introduction to SANCTUARY came in the early 90s. I was a young metalhead in the making and received a mixtape featuring the SANCTUARY classic “Future Tense”. I got both of their albums as quickly as a kid my age could (thinking I was 7/8ish).

NEVERMORE came into my life a bit later on. Remember, these were the days before you could just google search your favorite singers, and see what bands they were in. I think I was about 14 when I picked up a random metal compilation that featured NEVERMORE’s “I Am The Dog”. I even remember listening to it thinking “, This guy sounds like the singer from fucking SANCTUARY”.

I’m sure you could imagine my surprise and excitement to find out it was in fact the same singer. It wasn’t long after that I had picked up each NEVERMORE record that was out at the time. Warrel Dane, thank you for being such a huge part of my life and providing me with a lifetime of music.

I was fortunate enough to see you in person once in 2005 while you were on the first Gigantour. Sadly, the security guy took my camera at the door, so I wasn’t able to get a photo with you that day, but I was able to get a copy of This Godless Endeavor autographed. Hopefully, we can meet again on the other side, be it darkness or light. Much love There were a few quotes that I wanted to share, and I felt that was the best way to end the posting. Some said things much better than I could.

“So much to say but can’t find the words. Just solace in knowing we were friends again at the end of the day and that we enjoyed way more good times together than we did bad.” – Van Williams (NEVERMORE)

“We were good again, but not at the point of us jamming together. He was more dedicated to only music and he knew I had many other worlds to defile. I really wish we could have written again together. I wrote many things he probably would have been surprised by. Actually, I got SERPENT’S KNIGHT [Warrel’s pre- SANCTUARY band] back together in hopes to do a Seattle gig maybe with SANCTUARY after their next CD. He should still be alive. There was still much more in that man to give.” – Brad Poland (SERPENT’S KNIGHT)

“Warrel Dane is up in Heaven leading a legion of “Battle Angels”. I can hear that scream echoing through the clouds.. ‘Fall on your knees and hail to their dawn!’ Rest in Peace my friend” – Sean Peck (DEATH DEALER / CAGE)