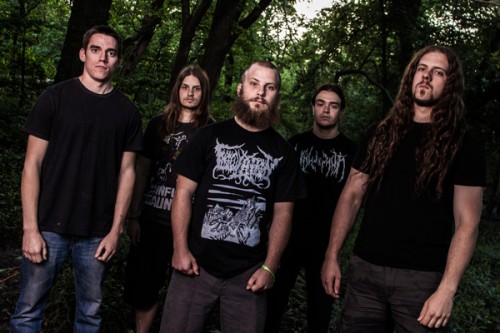 Pennsylvania death metallers Rivers of Nihil have released a lyric video for their song “A Fertile Alter”.

“A Fertile Alter” comes from Rivers of Nihil’s recently released album The Conscious Seed of Light.

Check out the video for “A Fertile Alter” as well as bassist Adam Briggs talking about the video and the concept behind the album here.

“Musically, this song is a bit of a nod to all of our old-school death metal influences. It’s kind of a more straight-forward head banger with a bridge part perfect for fist pumping and all-round pit brutality. The lyrics were inspired by the disgusting cult actions of Warren Jeffs and his FLDS church in the early 2000’s. Jeffs gained notoriety for controlling the lives of families involved with his sect and preying on their children. However, I always envisioned this song to be spoken from the point of view of a wolf. I really enjoy adding a layer of dualism within these songs.”

And on the album:

“The Conscious Seed of Light is intended to be representative of spring and explores various themes concerning new beginnings, growth, and an attachment to the natural world in a post-human Earth. Unlike some concept records however, we wanted to allow each song to work on its own terms. Rather than have the songs rely on each other to move a specific story structure forward; they work within their own separate narratives, but ultimately serve the album’s broader concept.”