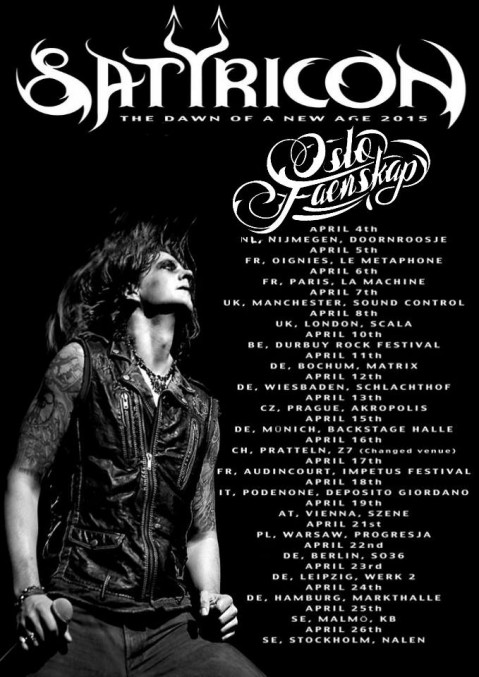 Satyricon tapped Oslo Faenskap and Vredehammer to support the “The Dawn Of A New Age 2015” tour in April.

Satyricon has always supported the Norwegian underground scene and will bring two potent new Norwegian bands out with them in April.

Oslo Faenskap is a young band signed to Indie Recordings. Their self released album “Give credits where credits is due”, was produced by Anders Odden (Cadaver, Magenta, Order, Satyricon). This album got the attention of Indie Recordings, and they are currently working on their record label debut.

They have supported various acts such as Mayhem, Kvelertak, Avenged Sevenfold and Satyricon on gigs in Norway. They mix all kinds of metal into their own blend and bring on a potent live show.

Vredehammer is fronted by Per Valla who has been involved with various extreme metal bands in the past such as Allfader and Elite. Their latest album, “Vinteroffer”, was nominated in the best metal album category at the Norwegian Spellemannprisen this year. They have one foot in the old school and one in the modern extreme metal category. Vredehammer is a name to look out for.