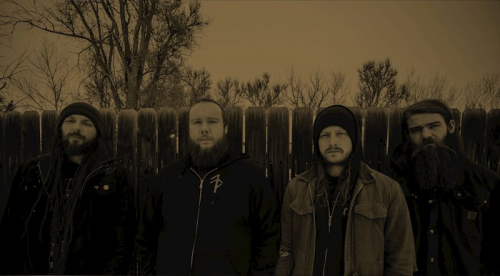 West Coast doom band UN have released their latest monument to moody brilliance, sophomore record Sentiment, on Translation Loss. While each track is over the ten minute mark as seems kinda hip these days, in the case of UN it is warranted and allows the full, glorious and dark sprawling landscape of each composition to be revealed like a vast panoramic slowly scrolling by. These guys really upped their game as well, a keener sense of melody infused into these potent prayers to both calm contemplation AND bleeding ears than ever before. Fret not that the heavy qualities have diminished in any way, but there is an even more clear sense of emotional impact and dynamics as the sounds within, particularly on one of the best songs I have heard all year “Pools of Reflection” , are completely stirring.

“While so many of our contemporaries choose to focus purely on the grim aspects of mortality, Sentiment is meant to serve as a token of gratitude in spite of the struggles of daily life”, guitarist/vocalist Monte McCleery comments. “It is a deeply personal and intimate thing to share your art with the world, and we hope that everyone who holds this album or hears these songs feels like it was written specifically for them.”

In support of “Sentiment”, UN will hit the road on November 3rd. The tour will take the band across the United States for 20 days starting in Seattle, WA and end in Boise, ID. The band will tour alongside Colorado blackened sludge duo, Oryx (No, if you are nearsighted like me that doesn’t say Onyx-sadly). In New Orleans,  UN will join forces with Georgia’s black death powerhouse, Withered for select dates.  Tour dates can be found below.

Track Listing:
1. In Its Absence
2. Pools of Reflection
3. Sentiment
4. A Garden Where Nothing Grows

Mixing/mastering/engineering credits:
Recorded, mixed, and mastered in February of 2018 by Dave Otero at Flatline Audio in Westminster, Colorado.

*With Oryx
+With Withered