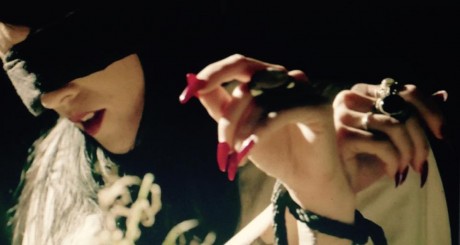 Oakland’s doomiest sons, Secrets Of The Sky have nothing to fear in terms underground acceptance. The band’s already garnered critical acclaim for their past work and are set to return with Metal Blade release Pathways, a record that builds on their already formidable mix of styles with even more dynamics. “Angel In Vines” is very Type O meets Daylight Dies reminiscent to my ears, in the best way!  Waves of sound will hurl you across vast spaces and the new music video is a dance of life versus the toxic.

Elaborates guitarist Clayton Bartholomew, “For this video, we went back to director Andrew Nethery, who also did the video for the song ‘Decline’ from our first record, To Sail Black Waters. He did a great job for that video and was an easy guy to work with. For the ‘Angel In Vines’ video, we let him run with his own vision. The song itself relates to the loss of innocence, and he found an interesting analogy to express this same sentiment, while keeping the video abstract and not just giving away the premise of the song. We like that he was able to avoid cliché and the imagery he was able to capture is a definite work of art on its own.”

Pick up the new record HERE.