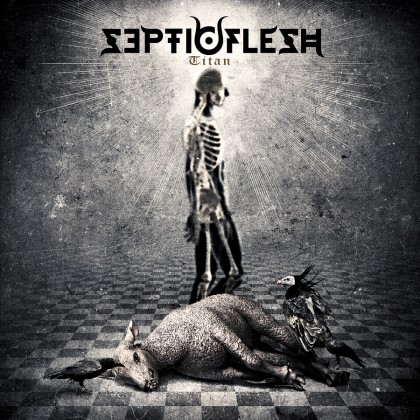 In recent times whenever a new release from Greek masters of the dark arts Septicflesh hits stores, you know you are in for probably the most ambitious thing you’ll hear all year. 2014 is no different, with their new Prosthetic Records masterwork Titan a strong contender already for album of the year.

Mixed and mastered by ex-Machine Head/Soulfly guitarist Logan Madder, it is a journey of unimaginable highs and lows that I could scarce do justice with a feeble description. “Dogma” is my favorite track, an onslaught of chilling proportions and vast space with amazing brass work and huge guitars roaring over abyssal depths.

The 4th behind the scenes video features great quotes from the band on getting the most blackened guitars possible, plus footage of them working with a children’s choir and their compatriots in the Prague Philharmonic Orchestra. This is the real deal on every level, a titan of a record for certain. And as the footage points out, man was first made wise by a Titan, Prometheus.

Pick up a copy of  Titan on 2CD Digipak (featuring an extra disc of five orchestral bonus tracks) or Gatefold 2LP from the band at one of their upcoming co-headlining shows throughout North America with Fleshgod Apocalypse, or from the Prosthetic webstore HERE. Digital downloads are also available now via iTunes (Standard / Deluxe) and Amazon MP3 (Standard/Deluxe).

Click HERE to be engrossed in the behind the scenes footage.