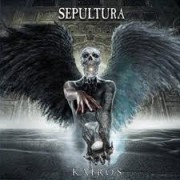 thrash powerhouse Sepultura are streaming their newest recording “Kairos.” this is their 12th studio album and debut with new label, Nuclear Blast. The album is due out on July 12th.

Translated from ancient Greek, a ‘kairos’ is a moment between, an undetermined time period where something profound takes place.

Sepultura guitarist and main songwriter Andreas Kisser comments: “The whole theme of the album is the concept of the time, and the title reflects that — it’s like one concept of time which is not chronological, from one to two; it’s like a an instant in time, it’s a special time of change…”