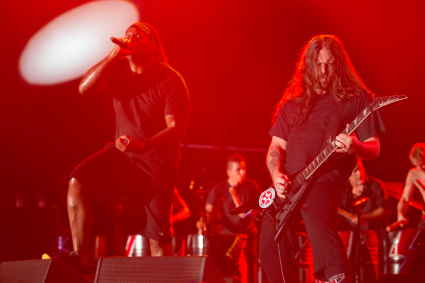 “Aggravations, hostility…but there’s a difference. We are free!” – Derrick Green, from “Spectrum”

Metal icons Sepultura are true survivors, a band that has stood for years as heavy music ambassadors to Brazil and beyond. Now the heavy metal tribal kings are poised to make a glorious racket yet again with the release of Sepultura And Les Tambours du Bronx: Metal Veins – Alive At Rock In Rio, out in North America on September 16th, 2014.

The album finds Sepultura plowing with vigor through classics like “Territory” and sing along fan favorite anthems “Sepulnation” and “Roots Bloody Roots” alongside the French industrial percussion group Les Tambours du Bronx, notorious for beating 225-liter barrels with beech wood bats or even axe handles! Could that much sound even be properly captured on CD/DVD? I checked in with imposing talent, vocalist Derrick Green, to get the story on one of the most impressive live statements of the band’s globe trotting career. 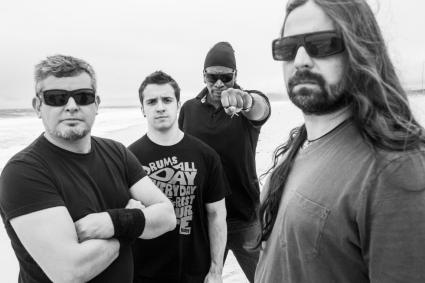 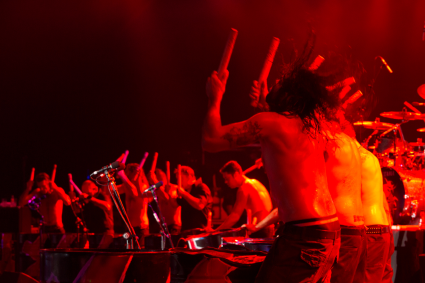 It’s awesome to talk to you. I credit you as saving Sepultura after Max left. Some of the records you’ve made I like as much or even more than some of the original band LPs. Against is so classic. And this new record with Les Tambours du Bronx…Sepultura over the years have worked with Jello Biafra, Dave Lombardo recently, some fun collars with Korn. But this Les Tambours du Bronx collaboration seems so natural.

Derrick Green: We met them at a festival years ago. Andreas and I were blown away by their energy, the power. We felt a camaraderie with them. We thought it would be cool to do something with them in the future. We got their contact and stayed in touch throughout the years. We did rock In rio a few years ago and the idea of the stage we played was two bands combining. It was a perfect opportunity to play with Les Tambours du Bronx. The second time is the recording we’re putting out now. The hug stage. It was so popular on the smaller stage, so we really wanted to record it so the whole world could really witness it. It was, as you said, such a natural combination.

“Delerium” there’s your huge roar after that first break and it sounds like it must have been so intense to perform this. All those people and percussion.

Yeah. The stage sound was enormous. It’s a little dazing. The more we become comfortable with having people in the way, it is such an incredible amount of energy. I’m looking forward to doing it more.

How many rehearsals does it require? I’m sure some of them were fans and knew some Sep sings already.

They were excited and they were Sepultura fans. I’m excited for everyone. We were enthusiastic about each other’s music.

The barrels and bats sound so intense on slower march riffs like “We’ve Lost You” from A-Lex (one of the best Sepultura albums) or “Roots Bloody Roots” ending. Soul crushing!

We tried for that.

It seems like it would be so hard to record something with that much going on!

Yeah! It somehow worked out on stage and it takes a lot of focus, really. We had to practice the songs but yeah, it’s a crazy amount of sound in a vast space. I’m very happy with it.

It’s amazing to hear them go from a huge noise to a dead stop several times and fans yelling “SEPULTURA”!!! Or hear a recent top notch cut like “Spectrum” get more love on a live release.

It’s really intense. I think it’s great to hear the diversity and the rhythms. The passion is there and you can feel it. I think it’s important in general for people to come together. It’s very special.

Has anyone from The Prodigy had ever gotten to hear your “Firestarter” cover?

I don’t know. I’m a big fan. I’ve been listening to them for a long time. It would be great if they did. We’ve done other covers like Massive Attack but Prodigy, I don’t know if they’ve ever heard it.

I actually told Al from Ministry about the “Just One Fix” cover you did right when it was released. He thought it was cool.

I really appreciate the energy you’ve brought to Sepultura. Now there are as many albums with you as not. I feel like your work is so consistent record to record. I first heard “Old Earth” and knew the band was in good, capable hands.

Thank you, man. It feels good to hear people say that. All the challenges, a lot of things came up…but we believed it. We think you can see that and get that at the live shows. There’s a lot of people talking bullshit a lot of times without even really knowing what they are talking about. For us, we put our energy into the show. People come to the show and they don’t care about soap operas or bullshit, so I think it’s great that people in both camps come back around. There’s never a doubt in our minds that Sepultura is powerful. It’s moving forward. The evolution of the band is upward.

I agree, and The Mediator Between Head and Hands Must Be the Heart was such a great record. Elements of all different eras of the band.The social lyrics on “Manipulation Of Tragedy” and “Trauma of War”. Ross Robinson. That record fucking kicked my ass, y’know?

(laughing) We had history with Ross Robinson. Being able to bring in (drummer) Eloy Casagrande…he’s such an integral part of the band. I think it’s a different level. Seeing him play and having that energy on the album and stage, it’s been great.

Big shoes to fill with any of the past drummers. But anytime someone has left or there’s been drama, Sepultura just focus on the work and putting out quality material/work. Being an awesome front man. 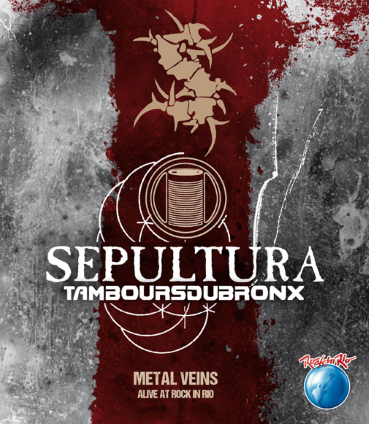 Sepultura can really bring people together. Different cultures but still represent Brazil or America. I was thinking of Ferguson or Gaza…Sepultura is more important than ever. Maybe it seems dark to some people but it’s truly a positive message.

(emphatically) Yeah, I agree. I think with the music we’re able to bring so many different cultures together and make people talk about different things. The world is full of tragedy but with music, it is a great way to unite and bring some unity to the world. We try to bring what we believe and stand behind along with the good fortune we have. There is meaning behind it and it’s really important to us. the unity is powerful and if you look around the world now, people are fighting for religion and race. Music is a great power for overcoming boundaries and things that are blocking different parts of humanity from being in the same place. I believe Sepultura has the power to affect change. 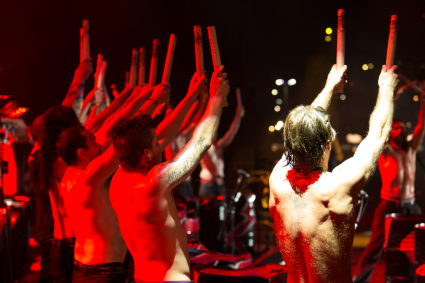