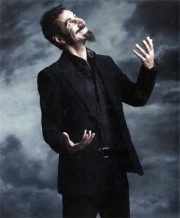 System of a Down front man Serj Tankian is working on the finishing touches of his third solo album. The album is titled Harakiri and is due out sometime this summer. The new album was produced and engineered by Tankian himself. An official album announcement from Tankian is expected to come very soon.

Tankian had this to say about the album: “The year 2011 started with a fire. Some kids in Piha, NZ were setting off fireworks that landed on my neighbor’s property and lit the whole hill on fire. I knew it was going to be a hell of a year and it certainly was,” says Tankian. “Within 5 days of that, reports came out about birds and fish dying in massive numbers globally. The omen was not lost on me.  Varied creatures on earth were committing massive hara-kiri (the Japanese term signifying ritualistic suicide.) Do they know something we don’t about the coming times or the sustainability of the environment? That is the day I started writing this record.”

To read the rest of Serj Tankian’s comments on the album click here..

Tankian added that this album would be a huge contrast to any album he has ever written before: “The record is different than any I’ve made as a solo artist. It is much more driving and punk oriented with influences ranging from goth to electronic to 80′s vibes, dynamically heavy rock to epic melodic songs. Lyrically, it spans the gauntlet of themes from personal, political and philosophical to spiritual, humor and love.”

Tankian also comments on how he took a different approach when writing this album in order to get ‘unexpected results’: “I used the Apple iPad as a songwriting instrument to sketch out three of the songs on the record. We must trick ourselves into writing in different ways to get unexpected results.”

More On: Alternative Metal, Release, System Of A Down, Columbia Records
share on: