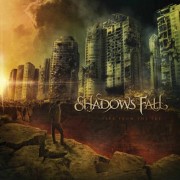 Massachusetts metalheads Shadows Fall have released the second single from their upcoming album Fire From the Sky.  The song is called “Divide and Conquer” and you can listen to it right here.

Fire From the Sky will be released May 15, 2012 under Razor and Tie Records and is a follow up to the band’s 2009 release Retribution.  To check out the first single called “Fire From the Sky” click here.