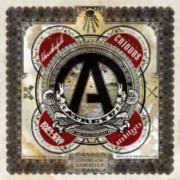 For the full separation of diamonds from the rough, click here for the review.Well my little cretins, the night started off with an easily forgettable opening line up. The only highlight was in between sets, they were playing a massive Gorillaz mix. I know, I know, not very metal. I’m just not that one sided and I like to branch out. They really have some deep cuts from their earlier work. Ok. I’m done with my tangent.

After some serious sessions at the pinball machine to distract my dissatisfaction thus far, I was pleased to hear the opening drum line from Chiodos’s “Caves.” Boy howdy now we’re rocking! Armed with a new singer and drummer, Chiodos recently dropped “Illuminaudio” without a hitch. A perfect medley of new and old songs kept the crowd interested and engaged. I talked with some rather devoted hands expressing a sincere interest in the new singer’s vocal capability live. I was most impressed. He had a super on-pitch voice and a very well-balanced scream, keeping tenacity and clarity. Other gems from their set were “Modern Wolf Hair” and “Is It Progression If A Cannibal Uses A Fork?” All and all, they are a spectacular live act who translate their recording to the stage quite well. I was able to pick up every nuance of each member’s instrument, thanks to the band’s own sound tech. Kudos to you my friend.

blessthefall I have seen several times now and I must say, they seem to get better every time I see them. Not that I am an overly avid fan, but their stage presence and confidence must have grown with each show.  I found them to be well balanced and thorough in their playing, while maintaining a killer edginess. The crowd packed in scores to support lead singer Beau Bokan as he repeatedly leapt from the stage, a feat not too many dare to partake in anymore. Way to not look like a poser bro.

At last our headliner graces the stage. A friend and I were betting shots on what they will open with, which I won. Of course they would get things rolling with the opening track from their latest release, “Congregation of the Damned.” Silly mortal. As “Stop! Before It’s Too Late and We’ve Destroyed It All” began the set, I knew where the show was heading already. Gone are the days of ground-breaking and genre-bending music from Atreyu, for they have traded it for the comfort zone of neutrality with their more recent releases. What can I say, “The Curse” and “A Death-Grip on Yesterday” were absolutely unmatched in their prime.  They look so automated on stage now. However, I give credit where credit it due. The almost majority of the songs played came from “Suicide Notes and Butterfly Kisses,” and drummer/singer Brandon Saller really held it all together. Imagine playing drums in a metal band and singing consistently. This guy has major chops as a musician.

So to wrap things up for you all, the show was up and down. I think Chiodos owned everyone in that club with their set. They really came with some fierce intensity all set long. Atreyu’s drummer is a bad ass and blessthefall has been getting better at getting down. I leave you now my little cretins with Atreyu’s set list and bid you all a good day!

Stop! Before It’s Too Late and We’ve Destroyed It All
Bleeding is a Luxury
Becoming the Bull
Ain’t Love Grand
Remembrance Ballad
Doomsday
When Two Are One
Blow
The Crimson
Drum Solo/Interlude/A Vampire’s Lament
Bleeding Mascara
Ex’s and Oh’s
Gallows
A Song for the Optimists
Encore:Lip Gloss and Black