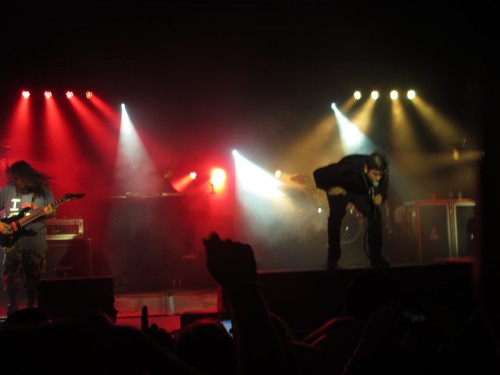 As I write to you today, my aching body is still reminded of the physical exertion it underwent to bring you this review. Yes darlings, I will gladly step into a sold out, full-floor, raging mosh pit to bring you a fresh feast of performance ferocity for your eyes to enjoy. Deftones had to reschedule this show due to Slurricane Sandy, so I was not surprised that the show was complete madness. Even though Washington DC’s Periphery successfully prefaced the pandemonium with their precision and poise, the people could not be pacified. The crowd wanted their long overdue headliner- and boy howdy, did they get it!

Terminal 5, based in midtown west, is a bit out of the way from the ease of mass transit, but with the aid of my former NASCAR cabbie, thankfully my running late became right on time. 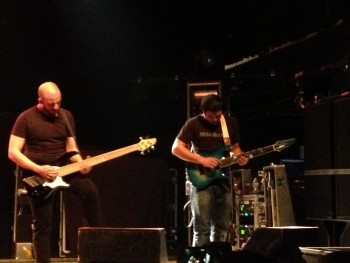 While seeing Deftones was a monumental experience, personally, my interest was skewed in favor of Periphery. My raging exuberance could not be contained in the days leading up to the concert, nor could I stop incessantly listening to their music. Each song left me with wicked sonic withdrawal only cured by droves of decimating decibels. I cannot wait until Periphery puts on their own headline tour. Fifty minutes was not nearly enough. They opened the blank stage with Muramasa, the opening track from their most recent release from Sumerian Records, Periphery II: This Time Its Personal. I was eagerly awaiting its series counterparts, Ragnarok and Masamune. These three all tie into each other musically and lyrically. They make me feel like I can levitate while exuding a massive electrical storm. The one axe I will grind is small but nonetheless necessary to point out. During Have A Blast, an audio track was played of Guthrie Govine’s solo—glaringly unoriginal when contrasted to their usual ingenuity. While most of the set was material from II, but they did break out an older tune, closing with Icarus Lives! from their self-titled album. 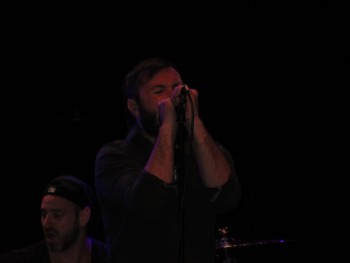 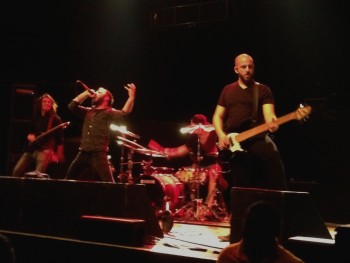 With a gracious thank you from their singer Spencer Sotelo and a big smile from band brain Misha Mansoor, they were done. Well received by the masses, I saw many a head singing and screaming along (much like myself). All in all, they nailed it.
The crowd was left with quite a buzz on from all the audio aperitifs Periphery served up, but the real swoon and sway lay ahead as Deftones crept onto stage, breaking in with their opening song, Diamond Eyes. The crowd-flooded floor fervently lashes out into song, belting out the lyrics to the band’s first three songs with undeniable certainty (reword). Later on, Rocket Skates elicited the same overwhelming response, as the 3,000 people screaming “Guns! Razors! Knives!” were singing to bring down the chandelier. Their set-list predominantly covered Koi No Yokan and represented Around The Fur very well. However, not a stitch came from Saturday Night Wrist. 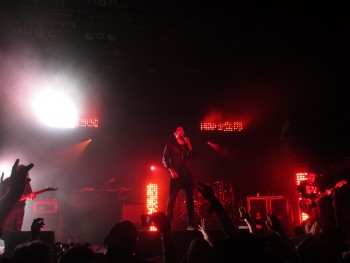 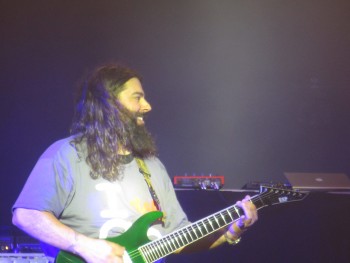 Singer Chino Moreno seemed to be enjoying himself as he was engaging the fans in the rafters. He smiles at fans both on and off stage – you can catch his grin during a stage dive or crowd surf. 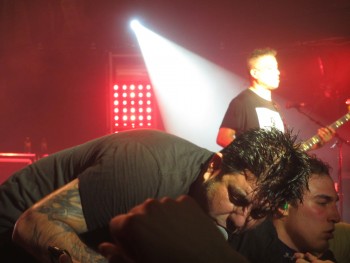 Lead by example, right? The crowd moved like a wave, crashing into the shore of people in front and underneath them. Scores of rabid fans made their way up to center stage, held high on many a spectator’s head and hand. Madness. While everyone was very physically active, the obligatory applause and whistles felt stale and I never really felt the love that one might expect from a crowd for a band of this caliber. The lack of cheers was so appalling, I took it upon myself to stomp and scream and clap like a maniac to incite some vocal admiration. Still, this was not enough to instill the necessary enthusiasm further from than the twenty or so people standing around me. At the lowest point, I even felt as if the band was not coming back out for an encore. Even after an Adrenaline fueled finish with Engine No. 9 and 7 Words, the final applause was not that impressive. It was a shame to see. After a performance like that, Deftones deserved more than what they got. 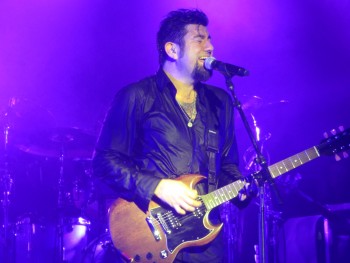 To wrap things up, Periphery’s opening performance was fucking amazing. The band proved that they are very capable and thorough performers, both on stage and in the studio. I wish they had played for a longer period, but they definitely ripped what they could during the time they had. Deftones put on a fantastic show, worthy of their legacy as one of the most influential bands in the history of modern metal and rock. It was just too bad the fans did not pay proper homage.