I can honestly say that I’ve waited a long time to see H.I.M.

There was this super anxious feeling deep inside me that I couldn’t explain. I was eager to hear what they sounded like live, what their stage presence would bring, and what their stage set up would look like.

I don’t know if I was more excited to hear H.I.M. play their new songs or their old songs. 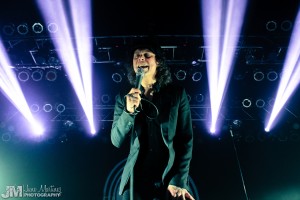 The band had a really peculiar stage set up. Candles with Edgar Allen Poe on both sides of the stage, a Ville Valo doll that hung from a back microphone stand, and a clear casing around the drummer. Their backdrop, a dramatic black and white Heartagram that gave the entire venue a loving eerie feeling– if that makes any sense at all.

Once the band stepped on stage, they lit up the room. The crowd went wild and then silent. The band played songs both new and old. The crowd appreciated that as they become more energized with each song.

The men in H.I.M. have certainly mastered the art of live performances. They are one of the few bands I have ever seen that sound EXACTLY like their records. If you closed your eyes, you’d swear you were listening to their album. Their set was perfection. Everything from the guitars to the vocals was on point. The band did not miss a beat. 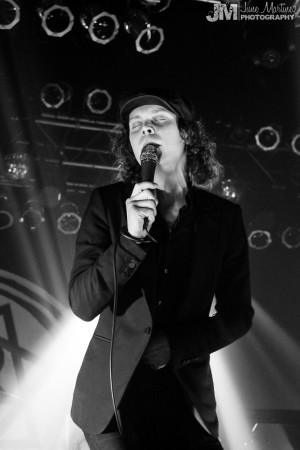 The band had a great persona on stage, they seemed to really enjoy being on stage. There was this great connection between the band and the crowd, as if everyone in the room had become this giant family. The atmosphere was this passionate mix of love and excitement.

I really enjoyed their show and recommend seeing them live if you haven’t already, you’re in for a show you won’t soon forget.

Catch H.I.M. at the remaining dates of their U.S. Tour. (click here for a list of dates).