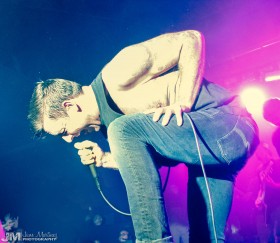 I wasn’t sure what to expect when I realized there were only three bands playing. I didn’t know how early or late the show would be over, how long sets would be, or whether or not the bands would lack energy due to the small bill. The Parkway Drive show would be a different animal.

I was pleasantly surprised when I showed up to a sold out Glass House and an amped crowd.

Betrayal was the first band to take the stage and they came out with tons of energy. The crowd was extremely pumped up by their wild stage antics. Although the crowd didn’t seem to take well to their hardcore rendition of The Offspring’s “Bad Habit” — they were forgiven by the audience and the band moved on.

Second up was Upon A Burning Body who always put on an amazing performance. This time was no different. The band hit the stage with guns blaring and had the crowd reach a new level of intensity. I counted about 30 crowd surfers before there was just a massive swarm of them on top of the crowd.

Frontman for the band Danny Leal had the audience in the palm of his hand, right where he likes them.

Finally, it was the time the crowd had been waiting for. Parkway Drive hit the stage and the crowd lost what was left of their minds. Parkway Drive lit up the stage with their presence the way no band before them had done. They managed to make the sold out venue with over 300+ kids and turn it into the most intimate setting. It felt as if we were all at a small basement show. The audience was so entranced by their performance. Even the band’s light show was nothing short of amazing.

If you haven’t see Parkway Drive yet, I strongly recommend finding out when they’re going to be in your city!

To keep up with everything Parkway Drive click here.