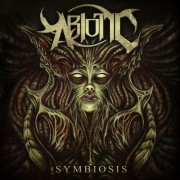 Miami’s Abiotic just punched me in the face when Symbiosis finally dropped. This album is their debut on the all-powerful Metal Blade Records, but it is more a re-recording of their EP, A Universal Plague. I feel like my beer milk money was taken after the initial familiarity kicked in with its intro track, Metamorphilia. If you happened to be one of the early adopters and already had the preceding album, you might feel jilted as I do.

Regardless, this album is fucking mind bending. Click here for the full review.

In certain places I prefer the first recording, and in others the new one is simply devastating. The first Vermosapien will always win over the second, but The Graze of Locusts on Symbiosis is a clear win . The intro song, Metamorphilia, was reworked by Cameron Losch from Born of Osiris and Exitus got a rearrangement for the better as well.

Of the three new songs, Facades is by far my favorite, and Hegira features Wretched‘s guitarist John Vail in this awesome six minute instrumental. To Burgeon and Languish is a nasty, technical squealer of a song that really shows off every band member’s skills. While the reworking of old songs is nice, they’re not new. I really felt let down with so few new songs on their mighty Metal Blade debut.

All that being said, Abiotic split my ears wide the fuck open when I first heard them in April. I was cracked out on Vermosapien and Aboitic for most of the summer. My anticipation for this album was insatiable. I’ve watched them book consecutively bigger gigs over the past eight months. They just recently confirmed their appearance on the Barge To Hell metal cruise, and the last time I checked, metal cruise isn’t booking bullshit bands.