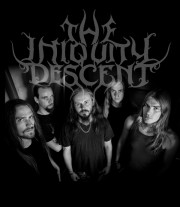 The Human Apheresis‘ track listing is as follows:

More News On The Iniquity Descent: