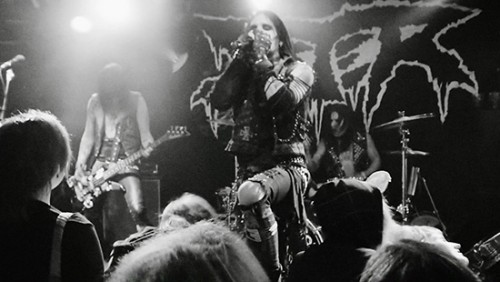 Sweden’s Sister have launched a throat thirsty new scuzz rock video for  “Slay Yourself” , from their kick ass latest Disguised Vultures. The band are pretty much one of the realest rock n roll acts out right now, a group who actually have a sense of anarchy on stage like rock is supposed to. I would take this any day over half the shitty hipster bands out or lame saturated candy vocals in metalcore hooks. This was filmed at venues in Sweden and Finland and captures the sweaty and raw energy unleashed on the club stages on that tour.

This video plus news that Dave Lombardo has joined fucking Amen (!!!!) has me believing again.

Sister has confirmed an appearance at the ‘Peace and Love’ festival in Borlänge, Sweden on July 5th. More tour dates for Europe are in the works and will be announced soon. Visit sisterofficial.com to stay up to date with the band.

Click HERE to get off on some crazy live energy bad attitude rock.