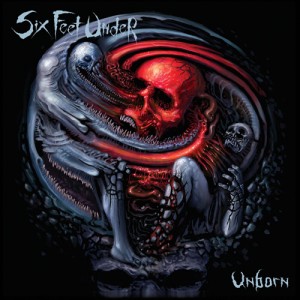 Tampa death metalheads Six Feet Under have just announced that their tenth full-length album, Unborn, will be released March 19th on Metal Blade.

Vocalist Chris Barnes (also the founding vocalist of Cannibal Corpse) had this to say about the record:

“The journey to create, write, and record Undead [SFU’s 2012 record] and Unborn has been the most challenging and exciting musical endeavor and process I have ever been involved with. Working with all these amazing writers and musicians like Ben Savage (Whitechapel) on songs like “Neuro Osmosis” and “Fragment” are some of the most dynamic, beautiful, and brutal songs I’ve ever had the pleasure of putting lyrics to… It was also a lot of fun working Jari Laine from Torture Killer again. We wrote a great album together a few years back called SWARM! –one of my favorite releases I’ve been involved with– and Jari is someone who I have really wanted to work with again ever since. I wanted to revisit collaborating with Jari because of how well we work together; proof of that on Unborn are the hook heavy sounds of songs like “Zombie Blood Curse” and “Incision.””

Check out the lyric video for the first cut released from the album, “Zombie Blood Curse” here.